Over the last few years, the legendary Voigtlander company has produced a variety of great lenses for Sony cameras.

The particular lens we’ll be looking at today is the Voigtlander 40mm F1.2, a rather unique little lens that offers manual focus but at a premium price point.

So how does this cute little lens compare to the more beefy autofocus competitors? Let’s find out. 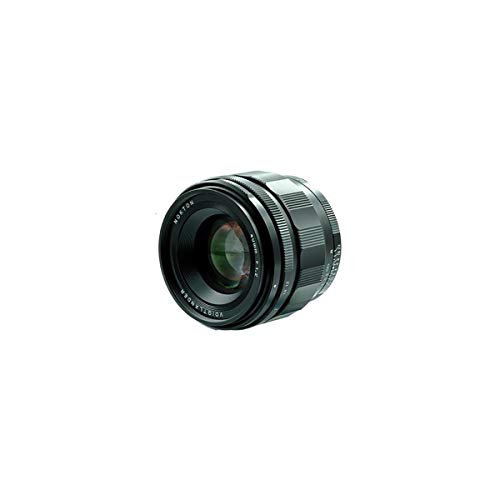 Voigtlander is known for making small yet premium lenses, and the 40mm is no exception.

It measures a rather diminutive 2.32 inches (5.9cm) yet weighs a rather hefty 14.8oz (420g). Because of this high weight rating, the lens feels sturdy and premium despite the small size, being almost reminiscent of a well built vintage lens.

I personally love manual lenses as the lack of an autofocus system allows them to get really, really tiny. It’s great for discreet street photography!

Build quality is, without a doubt, uncompromised. The lens, despite technically being a German brand, is manufactured in Japan by a company called Cosina (known for crafting lenses for companies such as Zeiss).

As with most things made in Japan, this lens feels bulletproof and features and all-metal build, even down to the lens hood.

Speaking of the lens hood, it’s not a typical bayonet kind, but instead is a screw-mount. For this reason, it’s not easily removeable or, for that matter, reversible. Luckily, it’s tiny so storing the lens with it attached is not an issue.

One negative point, however, is that it lacks weather sealing. Given the fact that this lens is nearly $1000, it would have been nice to see that included.

In any case, despite the lack of weather sealing, this lens is built like a tank and should last pretty much forever.

Aesthetically, the Voigtlander 40mm F1.2 is nothing short of gorgeous. The lens barrel is a sleek black which contrasts well against the red and white engraved text.

It almost has a look that combines both industrial and minimalist design philosophies, which really exemplifies the premium feel of the lens. As stated prior, it reminds me of a well-built vintage lens both in terms of quality and appearance.

As for ergonomics, it’s heavy yet small, which made it feel incredibly well balanced on my Sony a7. It’s the type of lens that you can shoot with for hours without suffering from any sort of hand fatigue.

Image quality gets a bit weird, and it is almost as if the Voigtlander 40mm F1.2 has two different personalities. Let me explain.

So, at wider apertures (think under F2), the lens is actually pretty soft, and renders this weird, almost dreamy aesthetic. It looks almost like you dragged the dehaze slider in Lightroom to the left just a bit. Some may like it and some may hate it. If you’re looking for a lens that’s extremely sharp wide open, this is not it.

On the flipside, however, dropping down just a few stops provides the complete opposite. When stopped down, the lens is stupidly sharp, rendering a near-flawless image from edge-to-edge. Contrast is very strong and the lens outperforms many of its competitors in terms of pure sharpness.

This two-faced characteristic is quite unique and is something I haven’t seen it any other lenses.

The aperture blades in the Voigtlander 40mm F1.2 are straight, which means bokeh doesn’t render perfectly round as with most lenses. This is a character-related thing, and I personally like the look.

That being said, the lens does suffer from a bit of geometric deformation at very wide apertures. At F1.2 and F1.4, bokeh is a bit “stretched” and takes on an almost cats-eye type shape near the corners.

This is something that a lot of lenses struggle with and, if I’m honest, it’s not a huge deal. It’s unlikely you’ll be shooting at F1.2 constantly and, even if you do, it’s an effect that isn’t very noticeable. Either way, bokeh is absolutely gorgeous, even when stopped down.

As for optical flaws, there are some. Vignette is quite strong, but it’s easily fixed in post processing, just at the risk of introducing some digital noise. I’m personally a fan of natural vignette, though, and I think it provides just a bit more character to an already very unique lens.

As for anything else, there is some minor pincushion distortion but it’s rarely an issue and is easily fixed in post processing. Flaring is well-controlled and shouldn’t be a concern, especially when using the lens hood.

Chromatic aberations are fairly strong when shooting wide open, but they’re largely fixable with a single click in post-processing. Astrophotographers should note that coma is very strong.

Overall, quite the impressive optical performance, despite the weird dreamy look when shooting wide open.

26 Reviews
Voigtlander 40mm F1.2
This lens, despite being soft wide open, offers exceptional sharpness when stopped down along with a premium build.
Check Price

The manual focus experience of the Voigtlander 40mm F1.2 is spectacular as one would expect from a company that specializes in exclusively manual lenses.

The focusing ring has a nice ribbed texture that makes it easy to grip and use without having to physically look at the lens itself. It’s perfectly dampened, and the focus throw is roughly 130 degrees, allowing for decently quick but very precise focus.

As I’ve stated before, it almost feels like using a well-crafted vintage lens, and I found getting accurate focus to be incredibly easy, especially when coupled with Sony’s excellent MF assists.

Another neat feature of this lens is the ability to set the aperture ring to be either clicked or clickless.

To switch it, there’s a small ring near the front that you pull forward and rotate 180 degrees. If the yellow line is on the top of the lens, it’s in clickless mode, and if the white dot is on top, its clicked.

I’ve used a lot of manual lenses with clickless apertures, and I’ve always wished I could change them as I’m much more partial to clicked rings, so this was a great feature.

Finally, I want to mention that the Voigtlander 40mm F1.2 offers electronic connections. This allows the lens to function almost like any other modern lens, offering EXIF data (including aperture/focal length) and allowing other bits of information to be transferred to the camera body.

This is great because it allows the focus magnifier to activate automatically when the focusing ring is turned, making quick focus a breeze. Additionally, it allows for full 5-axis stabilization (on cameras that support it), since some of that data comes from the lens itself.

I love the inclusion of modern tech (electronics) whilst still retaining the classic feel of a manual lens.

At the end of my articles, I usually like to give comparable alternatives. To be honest though, the Voigtlander lineup of lenses is incredibly unique in the fact that they are both premium and expensive, but are also tiny and entirely manual.

Out of anything, though, the new Sony 40mm F2.5 would be the closest competitor. It’s a bit cheaper, but is still quite well built, tiny and offers excellent optical quality. It is, however, an F2.5 lens so it loses a lot of light when compared to the Voigtlander.

Overall, the Voigtlander 40mm F1.2 is quite the unique lens. Stopped down, sharpness and clarity is excellent, but when shooting wide open it offers a sort of character that is unmatched by any other modern lens I’ve seen.

Coupling that with the tiny size and the premium build, this is a mighty little lens that is, in my opinion, perfect for the more artsy type of photographer. There’s a lot of potential with that soft, dreamy look when shooting wide open.

If you’re looking for a unique and very tiny lens, this one is the way to go. I’ll include purchase links below if you’re interested in checking it out yourself. Thank you for reading.

Some links on my website are affiliate links, which means I get a (very) small commission anytime you purchase anything at no extra cost to you. Thank you.