Viltrox is a lesser known brand that has, over the years, put out some really high quality and affordable glass for Sony cameras.

The glass we’ll be looking at today is the Viltrox 85mm F1.8, a budget autofocus lens for full frame bodies. Do note that this will be a review on the newer Mark II version as opposed to the original version that released in 2019.

So, with a wealth of 85mm options (both cheap and expensive) for full-frame Sony cameras, how does this cheap alternative stack up? Let’s dive in. 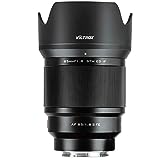 To start, the Viltrox 85mm F1.8 is fairly average sized when it comes to full frame lenses, measuring about 3.7 inches (9.5cm) but weighing a rather hefty 17.1oz (484g). A reasonable size, but definitely a bit on the chunky side (more on that later).

This is in stark contrast to the original version of this lens which weighed quite a bit more. This size & weight balances extremely well on my Sony a7 camera and feels natural in the hand. It also fits quite well in my Tenba BYOB 10 insert.

The lens offers an all metal build and feels rather hefty and durable in the hand. The exception to this is the lens hood, which is quite flimsy and, although it is reversible, is very hard to re-mount.

Another pain point is that the lens doesn’t offer any sort of weather sealing. While this isn’t surprising at this price point, it’s worth noting that the (admittedly more expensive) Sony FE 85mm F1.8 does offer a rubber gasket around the lens mount. Additionally, the USB port (more on that later) on this lens is another point where dust and moisture can get in.

Overall, the lens feels quite durable and built to last, but the lack of weather sealing and the flimsy lens hood make me a little hesitant of it’s longevity. It should survive some smacks and bumps, but I’d say it’s best to avoid rain and other adverse weather conditions.

Aesthetically, the Viltrox 85mm F1.8 offers a rather clean and minimalistic look. The lens barrel is sleek black with white engraved text, and the only thing that breaks up the design is a small orange badge with some text on it.

The focus ring is massive and the lens does, if I’m honest, have a very nice look that is almost reminiscent of a classic lens, especially due to the lack of any sort of physical buttons or switches. Even the lens hood, despite the cheap quality, looks great.

Ergonomically, it’s fairly comfortable to use. The size of the lens is pretty typical of full frame glass, and the weight, while a bit hefty, feels well balanced on a small camera like the a7.

The giant focusing ring makes a nice gripping point when out and about, and you shouldn’t suffer from any hand fatigue if only shoot for an hour or two.

Although you might expect somewhat lackluster sharpness on a “budget” lens, that’s not the case with the Viltrox 85mm F1.8.

When shooting wide open at F1.8, the center of the frame is respectably sharp but there definitely is some substantial fall-off near the corners both in terms of sharpness and contrast.

Stopping down, to around F4, is where the Viltrox really starts to shine, offering great corner-to-corner sharpness and beautiful contrast rendering. F8 is where sharpness seems to peak, as with most lenses.

Overall, quite impressive optical performance. The soft corners at F1.8 may look bad on paper, but in practice, it really isn’t a huge deal as most photographers will use this lens for portraiture.

Next up, let’s talk about aberrations and optical flaws. Chromatic aberration is a non-issue and the lens is largely free of distortion, as you’d expect from an 85mm, but does suffer from some other issues.

First of all, there’s a strong vignette when shooting wide open. This is fixable in post-processing, of course, but you do run the risk of introducing digital noise when shooting in low-light environments. Stopping down just a bit (F2.8 and beyond) largely remedies the problem.

Second, the Viltrox struggles with flaring. Shooting into the sun causes a pretty high loss of contrast and some moderate ghosting.

Many lower-cost lenses struggle with flare, so this is no surprise. I think it would still be a fine performer for backlit portraits, you’d just have to watch where the sun is coming from and make liberal use of the lens hood.

Although it can get a bit “busy” in certain circumstances, for portraiture it’s clean, bubbly, and smooth, offering very nice subject isolation.

There’s actually a lot to talk about with autofocus, as the performance of the Viltrox 85mm F1.8 is rather unique.

First, I want to mention that when shooting landscapes or other non-human subjects, that the lens will hunt a bit. It seems that it was designed entirely with portraits in mind, and the autofocus system gets “confused” when presented with anything else.

That being said, it performed beautifully for portraits. Sony’s EyeAF works like a charm and it nailed focus pretty much flawlessly every single time, even in tough lighting conditions.

Viltrox did release a firmware update somewhat recently that claims to address the weird focusing issues, but I haven’t tried it out, so I can’t speak on it. Regardless, the lens performs excellently with portraiture and that’s really the main reason most photographers will purchase it.

Next up, let’s discuss manual focus. The lens, like most modern AF glass, is focus-by-wire so don’t expect an incredible manual focus experience that rivals a classic lens.

However, Viltrox did a great job at making the focusing ring feel decent. Although there’s no hard stops, it’s well dampened, huge, and easy to grip. It plays well with all of Sony’s excellent focus assists such as peaking and magnification.

The last thing I want to touch on is the included USB port. This is a rather unique and weird feature that you really don’t see on many lenses.

The previous version (MK1) of this lens had a port as well, and they actually released a firmware update that, some how, turned the lens from F1.8 to F1.6.

As of right now, Viltrox hasn’t released anything like that, but they have put out an update that’s apparently supposed to fix the autofocus issues.

Before we finish out this review, I’d like to offer an alternative.

If you’re willing to spend some extra money, I’d suggest picking up the aforementioned Sony lens.

That being said, the Viltrox 85mm F1.8 truly can’t be beat for the price. For less than $400, you won’t find any other tight lens with autofocus that can compare.

If you’re looking for a great portrait lens for full frame but aren’t looking to spend a bunch of money, this is the way to go.

I’ll include purchase links below if you’re interested in picking one up yourself. Thanks for reading!

Some of the links on my website are affiliate links, which means if you purchase anything through one of my links, I get a (very) small commission at no extra cost to you. Thank you!