I’ve been practicing photography for nearly a decade and, I must admit, I’ve rarely dabbled in tilt-shift lenses. I thought they were cute and neat, but they never really struck a chord with me.

Recently, however, Pergear (parent company of TTArtisan) reached out to me and asked if I’d like to try out their new 50mm F1.4 Tilt lens. I figured, since I’d never dabbled in tilt-shift much, I’d accept their offer and give it a try.

So, while the lens was provided for free, all opinions are my own. To be frank, my take on this lens isn’t entirely positive. It may sound early on in the review that I’m just praising everything about it, but make sure to keep reading to get my full opinion. 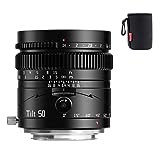 To start off, let’s talk about size and weight. While this lens is usable on both APS-C and full-frame, I’d say it’s more suited to full-frame bodies due to its weight.

The lens, thanks to the all-metal build, weighs in at about 16oz (450g) which certainly made it feel a little bit front-heavy on my tiny Sony a6000.

Size-wise, it measures roughly 2.7in (7cm), so it still manages to retain a fairly compact profile. Still, though, the compact size combined with heavy weight makes this thing feel like a beast.

Speaking of which, the TTArtisan 50mm F1.4 Tilt seriously feels well-built. Typically, a lot of third-party Chinese manufactured lenses feel a little flimsy, but this one certainly doesn’t.

The barrel, as I alluded to earlier, is entirely made of metal.

The focus ring and aperture rings are both made entirely of metal, with the focus ring offering a nice ribbed grip.

Even the two knobs to control the tilt/shift functions are entirely made out of metal. Seriously, this thing has so much metal that it’s actually cold to the touch. I love it.

The metal-palooza doesn’t stop there. The slide-on (not pinch) lens cap is also made entirely of metal and feels fantastic.

Literally, everything is metal except for one thing: the rear lens cap (which won’t be on the lens often anyways).

All metal goodness aside, the lens unfortunately does not offer any sort of weather sealing features.

This is, frankly, not a surprise, however. The TTArtisan 50mm F1.4 Tilt isn’t particularly expensive, and you’re already getting fabulous build quality for the price.

So yeah, although Chinese third-party lenses often fall flat in terms of build and quality control, this one certainly breaks that mold.

I can’t speak for the long-term durability (yet) as it just recently came out, but I really do feel as if this thing is built to last.

Finally, the lens is just downright beautiful. The barrel is a sleek black, which contrasts really nicely against the white text engravings.

The beautiful aesthetics combined with the hefty weight reminds me of a classic, vintage lens, which I really like.

Alright, now let’s get into the really important stuff: how well do the tilt and shift functions work?

To start, it physically feels good to tilt and shift the lens. As I mentioned earlier, the knobs are made of metal, easy to grasp, and very responsive.

A small silver-colored knob rotates the lens 0-90 degrees, while a large black knob allows you to rotate the barrel roughly 8 degrees in either direction.

The locking on these knobs is excellent, as I didn’t experience any “creep” of the tilt or shift mechanisms while out shooting.

Unfortunately, here’s where the negative aspects of the TTArtisan 50mm F1.4 Tilt come out.

First, you can only rotate the lens by 90 degrees.

This is odd, as a lot of manual tilt lenses allow full 360-degree rotations.

Next, the lens suffers from some light leaks. The reason for this is that even though the company advertises the lens as having an 8-degree tilt, it actually goes to about 9 degrees.

At 9 degrees, a very, very small gap opens at the side of the lens barrel, letting a little bit of light leak into the camera sensor. This is noticeable if you take the rear cap off, tilt to max tilt, and then look through the rear of the lens at an angle.

While this is annoying, it can be avoided by staying around a 7-degree tilt.

Some photos from a local model train show.

Alrighty, now that we’ve gone over the tilt and shift functions, let’s talk about the next most important point: image quality.

My lens tests don’t get very scientific, as I usually just take a bunch of pictures at various apertures and then pixel peep to the extreme. Don’t expect any sort of complex MTF graphs or anything like that.

To start, F1.4 looks pretty bad no matter the distance of your subject. The focus plane doesn’t seem to be perfectly flat (even with no tilt or shift) and it shows. Close-up subjects are incredibly soft and I wouldn’t even bother trying to shoot with F1.4 at long distances.

Stopping down a bit, luckily, does sharpen everything up. F2.8 starts to look decent, and I’d consider the lens to be pretty nice looking by F4.

Next up, let’s go over various optical flaws such as distortion, vignette, CA, and flaring.

To start, the lens only suffers from minor barrel distortion. It’s not particularly noticeable and easy to fix in post processing. For me, pushing the distortion slider +2 in Lightroom fixed it.

Next, we see a little bit of a vignette, as expected, but it is once again easily fixed with a single click in Lightroom.

As for chromatic aberrations, they’re there but barely noticeable.

Even when shooting high-contrast situations, I never found the CA to be bad enough to complain about. It’s either not noticeable or easily fixed in post.

Finally, flare performance is also pretty solid. There’s a little bit of loss of contrast (especially at F1.4), but it’s nothing that I would consider to be particularly egregious.

I do wish TTArtisan would have included a lens hood, however.

Overall optical performance was… not great but not bad. Although images look pretty nice at F4, I’d never even think about using this lens at F1.4, especially with the focus shift/plane issue.

On the flip side, it did handle distortion, vignetting, CA, and flaring pretty well, so overall a pretty decent performance.

Finally, let’s focus on focusing. There’s not too much to say here, as the TTArtisan 50mm F1.4 Tilt felt great to focus with.

It’s a pretty typical well-dampened manual focusing ring that’s easy to grasp and turn. Not much more to say there. It felt like a vintage lens or any high-quality piece of modern manual glass.

The last thing to talk about is the aperture ring. Declicked but well-dampened, the ring feels fabulous to use.

As far as I could tell, the stops were actually correct and there was no weirdness or inaccurate aperture like you’d find on some other cheap lenses.

Usually, before I round out articles, I like to give alternatives. However, I’m not a tilt-shift kind of guy, so I can’t really compare this with much.

For what it’s worth, I’ve seen other tilt-shift enthusiasts comparing this lens to the AstrHori 50mm. According to them, the AstrHori offers better image quality, but the TTArtisan offers substantially better build quality, ergonomics, and general usability.

So, at the end of the day, I’m not super into tilt-shift. From my impressions this lens, where it lacked in image quality, it more than made up for it in terms of build quality and general usability.

The all-metal build feels amazing, the knobs turn and operate with amazing precision, and it was generally just a really fun lens to use. If I’m honest, I actually might start taking this thing out on occasion. I love the “miniature” type effect on cityscapes, it’s just so cute.

If you’re a tilt-shift enthusiast, I would suggest giving the TTArtisan 50mm F1.4 a try. It’s not particularly expensive. There’s an Amazon (affiliate) link below for your convenience. Thanks for reading! 🙂

Here’s the direct link to the TTArtisan Shop.