Every camera ecosystem offers a “nifty fifty” lens, and Sony is no exception. The Sony E 50mm F1.8 was launched all the way back in 2011 for the original NEX lineup. This, however, has not stopped photographers from mounting it on their more modern Sony a6000 bodies.

As is typical of a nifty fifty, the lens has a wide F1.8 aperture, is small and compact, and is offered at a fairly budget price.

So how does this old lens perform now, over ten years into the future? Let’s dive in. 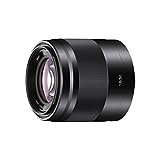 For those that care about having a lightweight setup, this lens certainly fits the bill. Measuring a reasonable 2.44 inches (6.2cm) and weighing only 7.1oz (201g), it’s a lens that was clearly made to match up with a compact APS-C body.

It balanced very well on my Sony a6000 and felt light as a feather, easily fitting into my Tenba BYOB 10 and even my (rather large) jacket pocket.

To put is short and simple: the Sony E 50mm F1.8 feels cheap, but that’s the price you pay when you get compact dimensions and a featherlight weight.

The barrel is made primarily out of cheap aluminum, looking and feeling like most other NEX lenses (seriously, old NEX lenses all have a flimsy feel to them).

That being said, again, you have to take some hits in build quality to achieve a compact and lightweight piece of glass. This isn’t meant to be a luxury lens, but rather the iconic budget 50mm that every manufacturer offers.

First, and this is subjective of course, but I think the lens looks aesthetically poor. It’s offered in two different color choices: silver and black. While the silver is a bit more unique, the black certainly has a much more sleek appearance to it.

There are no physical buttons on the lens, meaning AF/MF and image stabilization have to be changed in the camera menus. This is fairly par for the course with small budget lenses.

On a positive note, the ergonomics were nice. When mounted on my Sony a6000, the lens felt quite comfortable to use (due its low weight) and I didn’t have any issues dragging it along on long shoots.

Next up, let’s discuss sharpness. The Sony E 50mm F1.8 isn’t perfect, but performance is definitely more than adequete.

Wide open at F1.8, the lens delivers decent center sharpness, but it falls off quite a bit near the corners.

Stopping down to just F2.8 sharpens up the entire image, offering respectable and consistent sharpness from edge-to-edge.

Resolution peaks around F5.6, sharpening up the lens just a little bit more.

Overall, not the greatest image quality, but acceptable. It’s important to note that, since a 50mm is generally used for portraiture, corner sharpness doesn’t matter as much.

Speaking of portraiture, the lens renders some pleasant bokeh. Not the best in class, but certainly nice.

Sony OEM lenses tend to be fairly problem free when it comes to optical flaws, and the Sony E 50mm F1.8 is no exception.

The only issue it struggles with is a rather strong vignette. It’s lessened by stopping down, and frankly, portrait photographers may appreciate it as it enhances subject isolation just a little bit more.

That being said, it’s easily fixable either in post-processing or by shooting in JPEG mode.

Other than that, the lens does flare a bit, but doesn’t suffer from any sort of distortion or chromatic aberrations.

As far as autofocus goes, it works well enough. It’s not blazing fast like some newer lenses, but it works well, rarely hunts, and is quiet.

As is typical with Sony lenses, the Sony E 50mm F1.8 plays well with EyeAF and AF-C (continuous subject tracking).

For manual focus users, I want to mention that the lens feels like pretty much every other budget AF lens.

That being said, it was still fairly easy to get decent focus thanks to focus assists such as peaking and the magnifier.

Optical image stabilization is offered with this lens, which I think is one of the biggest selling points.

It works incredibly well, and, when combined with the silent autofocus, makes for a nice little lens for video.

First, the incredible Sigma 56mm F1.4. It’s the sharpest lens for Sony APS-C cameras, it’s incredibly well built and still quite compact. It is, however, much more expensive and lacks stabilization.

Second, the Kamlan 50mm F1.1. It’s a rather weird lens that’s entirely manual focus, but is built like a tank and offers incredible optical quality. It’s roughly the same price but, again, offers manual focus only.

Personally, I think my two listed alternatives are better in almost every way, except for one aspect: stabilization.

The Sony E 50mm F1.8 isn’t the most well built lens, nor does it offer absolutely top tier sharpness, but I will admit that it performs well enough and would more than adequate for most photographers.

As I said, the mixture of image stabilization, size, and price are the greatest strengths over competitors.

If you’re looking for a budget lens that is both small and stabilized, the Sony E 50mm F1.8 may be the one for you. If you want to pick it up for yourself, I’ll include purchase links below, thank you for reading.

Some links on my website are affiliate links. This means that if you purchase something through one of my articles, I’ll get a very small commission. Thank you for keeping me fed. <3