Compact, versatile & decently sharp. These are the words I’d use to describe the Sony E 35mm F1.8 OSS.

Having been released for the original NEX line many years ago, it’s not exactly new or cutting edge, but it’s still a powerful little package.

That being said, it won’t be the best fit for every photographer, and there are a couple other alternatives in this focal range. Do note that we’ll be talking about the APS-C (Sony a6000 series) version, not the full frame alternative.

So, with a compact footprint and optical image stabilization, how does this little lens stack up so many years later? Let’s dive in. 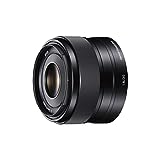 To start, we’ll talk about the size & weight of this lens. If you’ve read any other content on my site, you’ll know that I adore compact setups.

This is incredibly small. It’s lenses like this that made me fall in love with the Sony mirrorless lineup when I first was considering switching systems.

It’s not quite as small as my manual focus Neewer 35mm F1.7, but it’s still substantially more compact than pretty much any other AF prime that I have in my collection.

This is especially impressive when you consider that the lens has both autofocus and OSS.

To put it bluntly, build quality is rather poor. The lens is made of a mix of aluminum and plastic like most old NEX lenses.

While this cheap material combination allows the lens to achieve an incredibly lightweight footprint, it doesn’t lend itself well to creating a premium feel. This lens certainly feels like a budget APS-C lens.

That being said, I want to point out again that this lens is 1.77 inches (4.5cm) long and weighs next to nothing. That’s incredibly compact, especially considering Sony managed to stuff both autofocus and optical image stabilization inside.

As a fan of small setups, I believe a drop in build quality is a worthy trade off to get such a powerful lens in such a tiny package.

The lens, despite it’s build quality shortcomings, does include a rather nice lens hood. It’s not huge, but it does the job of protecting the front element from both bumps and flaring. It’s also reversible, allowing the this tiny Sony to stay small even in storage.

The Sony E 35mm F1.8, as with most NEX series lenses, sports a very basic and minimalist look. The lens comes in two different color variations: silver and black.

The silver is honestly extremely ugly and makes the lens look flimsier than it actually is, but the black looks pretty nice.

The sleek dark material of the lens barrel contrasts well with the rather minimal white text engravings.

The barrel doesn’t offer any physical buttons or switches (such as an AF/MF switch), instead taking up most of the limited space with a nice, ribbed focusing ring. As an avid user of manual focus, I’m usually a big fan of having a physical switch, but I can understand why it was omitted on such a tiny lens.

As for ergonomics, I love the size. Build quality may be rather poor, but at least it makes for an incredibly compact lens. When mounted on my Sony a6000, it barely feels like anything is even on there, allowing for easy and comfortable one-handed shooting.

Additionally, the ultra-short length allows the lens to be easily stuffed in a jacket pocket when not in use. Overall, quite comfortable on a day out shooting.

Moving onto sharpness next, I found that while it can’t quite compare to the incredible Sigma 30mm F1.4 in terms of sharpness, the Sony E 35mm F1.8 can certainly hold its own.

When wide open, the lens has some overall softness. Centers don’t look great and corners certainly look rather poor. When stopped down to just F2, centers sharpen up but there’s still a lot of fuzziness around the corners.

That being said, at this aperture, the corners will be a lovely mess of bubbly bokeh anyways, so the corner softness is not entirely worrisome.

Resolution peaks around F4-F5.6, rendering some pretty solid edge-to-edge sharpness. Again, not quite on the level of the Sigma 30mm F1.4, but still very, very respectable in its own right. If you’re not an extreme pixel peeper, you won’t notice any flaws when it comes to sharpness.

The Sony E 35mm F1.8 is largely free of any significant optical flaws. The only major issue it suffers with is chromatic aberration. It can be fairly strong when shooting wide open on bright days, but stopping down largely reduces it. Frankly, it’s nothing a quick click in Lightroom can’t fix.

The lens suffers from a very minor case of vignetting, but nothing that, again, a quick click in post-processing can’t fix.

For my fellow bokeh fans, the Sony E 35mm F1.8 OSS does render some very nice bubbly bokeh despite being a somewhat wider lens.

It won’t look quite the same as say, a telephoto, but it still delivered really nice looking results for the focal length. No complaints from me there.

As for focusing, the Sony E 35mm F1.8 OSS was fairly decent. Autofocus definitely can’t compare to more recent lenses, but I still found it to be decently quick & reliable. Being an OEM Sony lens, both EyeAF and AF-C (continuous subject tracking) worked extremely well.

The only times where it really tripped up were in either high contrast or low light situations, and that’s kind of to be expected, especially given that its a lens from 2013. Overall pretty solid performance, no major complaints from me.

The autofocus motor, as a bonus, is also very quiet. This silent and reliable AF combined with the impressive optical image stabilization makes this a fantastic lens for video shooters looking to upgrade from the basic kit lens. With the OSS, you can expect to gain about three stops of light.

For those photographers who enjoy manual focus, like myself, the Sony E 35mm F1.8 provides a pretty typical MF experience for a modern lens.

The focusing system is focus-by-wire, causing a sort of disconnected feeling when spinning the ring.

Don’t get me wrong, manual focus still works totally fine, it just won’t compare to a vintage or dedicated manual lens. The focus peaking and focus magnifier features on my Sony a6000 help a lot.

Before we round out the article, I want to offer two lens alternatives. Neither are necessarily better or worse than the Sony E 35mm F1.8, just different.

The first would be my favorite APS-C lens of all time: the Sigma 30mm F1.4. The biggest downside is that it lacks OSS. Additionally, it’s substantially larger at about 2.9 inches (7.3cm).

The upside is that it’s substantially sharper and also a good bit cheaper. I’ve owned that particular Sigma lens since I first bought my Sony a6000 camera, and it still remains my favorite to this day.

My second suggestion is for those on an ultra-thin budget: the Neewer 35mm F1.7. Optically, it’s just about as sharp as this Sony lens but suffers from some horrific flaring. It is, however, incredibly tiny (1.23 inches or 3.1cm) and also quite cheap, usually hovering around $69 dollars.

The biggest caveat, however, is that it is entirely manual focus (and lacks OSS of course).

At the end of the day, the Sony E 35mm F1.8 fulfills a certain niche. Sure, it offers solid image quality and decent autofocus, but what really matters is the incredibly compact size and the optical image stabilization. If you’re a video shooter, for example, this lens is nearly perfect.

Sharper alternatives exist, but you won’t find a smaller lens that is still able to offer autofocus AND stabilization.

If you’re interested in picking one up for yourself, I’ll include purchase links below. Thanks for reading.

Some of the links on my website are affiliate links. When you buy something through one of these links, I get a small commission at no additional cost to you. Thank you for keeping me going! <3