Ever wondered how to capture light trails as cars drive by? Want to capture beautiful photos of the night sky?

In this quick and concise guide, we’ll be going over how (and why!) to change the shutter speed on your Sony a7iii. Additionally, we’ll be talking about what shutter speed is and in what situations you should change it.

Table of Contents show
1 How to change shutter speed on the Sony a7iii?
1.1 Spin Mode Dial to “S”
1.2 Spin w/ the Rear Dials
2 What is shutter speed?
3 Why would I want to change my shutter speed?
3.1 Capturing Action
3.2 Long Exposure Photos
4 Practicing with Shutter Speed
4.1 Experiment and have fun!
4.1.1 Low Light Situations
4.1.2 Light Trails
4.1.3 Astrophotography
5 Conclusion

How to change shutter speed on the Sony a7iii?

The first thing we need to do is spin the mode dial (on the top of the camera) to “S”. This stands for shutter priority.

What this mode does is it allows you to adjust the shutter speed and, by default, the ISO. Aperture continues to be controlled automatically by the camera (unless you switch to “M” mode).

Now that your camera is set to the right mode, you can change the shutter speed by simply spinning one of the dials on the back of the camera.

Do note that in manual mode (“M” on the mode dial), one of these dials will adjust shutter speed while the other will adjust aperture.

What is shutter speed?

So what exactly is shutter speed? The concept is quite simple: it’s just how long your camera’s shutter stays open.

On the Sony a7iii, you can shoot as fast as 1/8000th of a second (that’s REALLY fast), or as slow as 30 seconds. However, the camera also supports “bulb” mode, which allows for extremely long shutter times with the help of a remote shutter/timer.

Why would I want to change my shutter speed?

Learning how to change your shutter speed opens you up to so much new potential in photography.

First off, if you want to capture fast action or a moving subject (such as a car or someone biking), you’ll need to adjust your shutter speed to be shorter (faster).

Shooting with a quick shutter speed (1/1000s for example) allows you to capture sharp, clear pictures of fast moving subjects.

On the other hand, slowing down your shutter speed and using a “panning” technique (following the subject while the shutter is open) helps you capture blurred action, heavily emphasizing movement in an image.

The other reason you’d want to increase your shutter speed would be to shoot in dark environments, or to capture moving lights.

If you’ve ever looked at a picture of car lights streaking down a roadway, you’ve probably wondered, “how did they capture that?”. The answer is a long shutter speed.

For these kinds of shots, you need a very stable surface for your camera. Generally, you’ll want to invest in a nice tripod, although a table or other solid surface can sometimes do the trick.

Speaking of tripods, here’s one of my favorite mid-budget options. 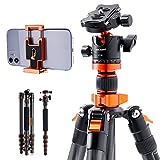 Experiment and have fun!

Now that you know the basics of how shutter speed works, the best way to learn it is to get outside and start practicing!

There’s a variety of ways you can practice, but I’ll throw a few of my favorite “genres” below.

To start, shoot in any situation where things are dark and you want to capture details. Normally, taking a picture at night will result in a completely black image, but opening up your shutter speed can bring in more “information” and details to the camera sensor.

A very simple exercise is to go outside when it’s dark, set up your tripod, and try to photograph either your house or the city/streets around you.

Adjust the shutter speed and keep shooting, and you’ll eventually start to get a feel for what kind of settings you need to capture certain scenes.

Second, my favorite thing to do with long exposures: photographing light trails from cars!

Find a bridge or busy intersection nearby and set up your tripod. Choose a long shutter speed (you may have to increase it more if there’s not a lot of traffic) and then press the shutter button as a large volume of cars drive by.

Although this works best at night (due to the environment being dark already), you can also shoot long exposures in the daytime with the use of an ND filter (to block light).

This may be difficult for some people, as light pollution in major cities makes capturing the stars nearly impossible. However, if you live in an area where the sky is clear, give it a try!

Generally, you’ll need a wide, bright aperture lens (such as the Sony FE 20mm F1.8) along with a tripod and remote shutter (to avoid any potential camera shake).

Astrophotography is quite a complicated subject, so I’ll point you over to my friends at Lonelyspark. They taught me a lot of what I know when it comes to capturing the night sky.

Learning the manual controls of your camera can be tough at first, but with some practice you’ll become a natural!

As I mentioned before, the most important thing is to get outside and start practicing. Play with your camera.

If you’re looking to delve deeper into the exposure triangle (full manual control), check out my a7iii-focused guides on aperture (F-stop) along with ISO.