Looking to get into shooting video with your Sony a6000 but are disappointed with the microphone quality?

In this quick and concise post, we’ll go over two ways (easy and complicated) to connect an external microphone to your a6000.

Let’s dive into it!

The most simple way to improve the audio on your Sony a6000 is to purchase an on-camera mic. However, this camera doesn’t feature a microphone port, so you’re stuck with Sony’s single OEM option.

The Sony ECM-GZ1M is a shotgun microphone that mounts onto the hotshoe. Consider picking up a “deadcat” (wind filter) such as this one from Amazon.

This hotshoe mic is much better than the integrated microphone, but still isn’t flawless. Still, picking up the ECM-GZ1M is the best way to easily level up your audio game.

To recap, here’s the two things you’ll need for the “easy” method of audio recording.

Although the Sony a6000 doesn’t have a microphone port, there’s another (complicated) way you can get external audio that doesn’t involve the OEM Sony microphone.

It’s worth noting that this method involves recording audio separately from the camera, meaning you’ll have to combine the audio and video recording in post processing. This can be a bit more of a pain, but is worth it if you’re looking for the absolute best audio possible.

This method involves attaching an external microphone to your smartphone. For this, you’ll need some sort of recording app on your phone. I use Google’s Recorder app for Android and Apple’s built-in Voice Memos app for iPhone.

Next, you’ll need to mount the microphone. The hot shoe mount that I linked previously has a “cold” shoe on the top, allowing this microphone to slot right into place. After that, simply plug it into your smartphone.

From there, you can record (high quality) audio right to your phone and then splice it together with the footage in editing. Personally, this is the method I use, although it can be cumbersome.

To recap, here’s the list of things you’ll need for the “hard” method of audio recording. 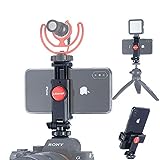 Hopefully this helped you figure out how to get better audio out of your Sony a6000. If you purchase anything through my links, I get a (very) small commission. Thank you for your support! 🙂