Although the Sony 18-105mm F4 released almost a decade ago, it’s still a very well loved lens to this day.

Back in the day, it was Sony’s take on a versatile all-purpose zoom lens build specifically for the a6000 lineup.

Many years later, we’ve seen a lot of innovations and new offerings in the Sony APS-C space, so how does this old zoom lens stack up? 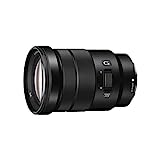 The first thing I want to bring to attention is the sheer size and weight of this monstrous lens.

Combine the size with the 17oz (481g) weight and you’ve got a lens that’s much larger than your average APS-C glass.

Seriously, this thing is huge. With that being said, large dimensions and heavy weight pretty much comes with the territory when you’re talking about such a versatile lens.

After all, it’s able to go from a wide focal length all the way into the telephoto range whilst still keeping a consistent F4 aperture, so the size is to be expected.

The Sony 18-105mm F4 sports the iconic “G” badge, meaning it’s a part of the company’s “Gold” line of lenses. This signifies its position as being (as Sony claims) one of the company’s “best and highest quality” lenses.

As far as build quality goes, I don’t find that claim to be that far off.

The lens barrel itself is made out of primarily metal and, as I stated prior, it’s incredibly heavy which really solidifies the premium feel.

It’s huge, heavy, and does a fantastic job at protecting the big front element from both bumps and flaring.

Thankfully, this gigantic lens hood is reversible, allowing for the lens to be stuffed in most camera bags (though it’s a snug fit in my Tenba BYOB 10).

Sadly, despite all the other good news, the Sony 18-105mm F4 does not offer any sort of weather sealing.

It’s certainly a bit of a disappointment, but this lens was originally made for the a6000, which also lacks weather sealing, so I’m not particularly surprised.

So is the lens built to last? I’d say yes. While not quite on the level of a full-frame G-series lens, it’s still incredibly well built and should, in theory, survive the day to day rigors of photography.

While it doesn’t have weather sealing, I imagine it should survive light rain and other minor inclement weather, as all my other non-sealed Sony lenses have. Time will tell.

While I love the quality and premium feel of this lens, I do have to mention it’s somewhat uncomfortable to shoot with for extended periods of time.

The lens feels quite front-heavy when mounted on my tiny Sony a6000.

Frankly, I don’t think I’d want to go more than an hour of carrying this thing around without a break.

If you go out for a day of shooting, make sure to bring a bag with you so you can occasionally give your wrists a rest. I really can’t overstate that this thing is massive.

As far as aesthetics go, beauty is subjective of course, but I like the overall look of the Sony 18-105mm F4.

Aesthetically, it certainly looks like a higher end lens, with the exception of the somewhat silly zoom lever (more on that later) on the side.

The barrel is finished in a sleek black material that contrasts extremely well with the white engraved text. The ribbed zoom and focus rings are absolutely massive and easy to grasp, while a huge glass element dominates the front of the lens.

The heavy weight and the sleek appearance (plus the iconic “G” badge) really, really do tie together to create a very premium-feeling piece of glass.

As the Sony 18-105mm F4 is such a versatile lens with a huge focal range, there’s a LOT of information to unpack here when it comes to sharpness.

This is going to be a pretty chunky, information-filled section.

Starting off at the widest end of the zoom range, 18mm, we see iffy performance when shooting at F4. Sharpness in the center of images is fairly strong, but corners have substantial fall-off.

Stopping down improves things somewhat, sharpening up the centers more and allowing the corners to catch up a good bit. Still not flawless of course, but certainly more than fantastic unless you’re an extreme pixel peeper.

Zooming into around 40mm improves things a bit.

Stopping down a bit at this focal length boosts sharpness up to pretty respectable levels and makes for some solid edge-to-edge performance.

Again, pixel peep versus an ultra sharp prime lens and you could find some flaws, but so far we’re seeing really good performance for such a versatile zoom.

When zoomed up to 75mm, performance is similar.

At F4, center sharpness is solid and corner fall-off is minor.

Stopping down, once again, improves these numbers a bit, allowing for great and respectable sharpness across the frame.

At the telephoto end of the zoom range, 105mm, we get a bit of a reduction in quality.

At F4, centers still remain sharp, but we see heavy fall-off near the corners. Stopping down does little to remedy this corner softness.

However, it’s worth remembering that this focal length will likely be used for portraiture and other subject-focused work. Corner softness isn’t quite as big of a deal.

I’ve been quite impressed with the general sharpness of this lens. Really respectable given that it is, once again, so versatile.

Next up, we’re going to be looking at optical quirks and flaws.

The Sony 18-105mm F4 is largely free of most optical issues, although there are some things to touch on.

Distortion is, by far, the biggest issue this lens struggles with.

Near the wider end of the zoom range, distortion is well controlled and any hiccups are easily fixed in post-processing.

When zoomed all the way into 105mm, however, we see about 7.2% pincushion distortion. This is quite heavy and can be tough to remove in post.

Once again, 105mm will likely be used primarily for subjects where distortion isn’t as big of a problem though, so I don’t see this as being an absolute dealbreaker.

In addition to the distortion, we do get a little bit of vignette.

Frankly, it’s not particularly strong, and tends to go away when stopped down (varies by focal length).

Easily fixable in post processing and generally not something to worry about.

Finally, chromatic aberration and flaring are both very well controlled.

Even in extreme situations (branches against a sunny sky, for example), chromatic aberrations were minimal and easily fixed in post processing.

Shooting directly into sunlight can cause a bit of flaring and loss of contrast, but nothing that you’d really need to worry about.

Overall, I was incredibly impressed with the optical performance of this lens.

Were there flaws? Yes, absolutely. However, you can’t expect absolute optical perfection out of such a versatile lens.

There has to be some sort of compromise, and in this case we have heavy distortion and corner softness at both ends of the zoom range.

Next up, we’re going to focus on focusing. To be honest, this is another category in which I have very few complaints.

It’s a G-series lens and it just works.

In almost all situations, the Sony 18-105mm F4 focused quickly and reliably.

In extreme low light situations, I found it to have some hunting problems, but that’s frankly no surprise.

Additionally, I found it to play quite well with Sony’s focus assist systems.

EyeAF tended to be quite accurate across the entire zoom range, but of course it managed to grab the eyes a lot more frequently when zoomed in closer.

Continuous subject tracking (AF-C) also worked great. Even when zoomed all the way out, I was able to lock in on subjects with minimal hunting and consistent focus.

As for manual focus, I don’t tend to use MF on zoom lenses often, but I gave it a try here.

As any other manual focus enthusiast may expect, this lens is entirely focus-by-wire like most modern glass.

The focusing ring isn’t very well dampened and I found that pulling precise focus was a little bit tough, even with peaking and magnifier enabled.

This didn’t really come as a surprise to me, however, as many modern lens (especially zooms) have fairly iffy focusing rings.

The zoom system in this lens is purely motorized, being a part of Sony’s “power zoom” lineup.

I must admit, it feels a bit unnatural. Usually, you’d spin the zoom ring and the lens would react, but that’s not quite the case with this one.

Spinning the zoom ring essentially sends a command to the computer which will then activate the motor to zoom the lens in and out.

It certainly feels weird, but I got used to it pretty quickly. The little lever on the side can be used to (smoothly!) zoom in and out.

Speaking of smooth zooming, this lens is absolutely fabulous for video work.

The stabilization combined with the versatile focal range and smooth zooming system (plus fast/silent AF) makes this lens an absolute godsend for video shooters.

This lens is pretty much in a league of its own, but before we round out this review, I want to present a couple alternatives.

The zoom range is even more versatile, it’s a bit smaller, and the price is roughly the same.

The image quality, however, is incredibly hit or miss depending on the focal length, aperture is variable, and the build quality doesn’t quite match up.

The zoom range is a bit less versatile, but you gain great image quality and a brighter max aperture.

Other than that, however, it’s largely the same. Very large, heavy, and about the same price.

So yeah, in the end, I think the Sony 18-105mm F4 is an absolutely fantastic lens. I am personally an avid prime lens user, but the versatility and performance of this big zoom may have converted me.

It’s large and heavy, but there’s no other lens that offers this kind of optical performance, build quality, stabilization, and blazing fast autofocus whilst still offering such a versatile zoom range.

If you’re looking for a fabulous all-rounder lens that can do anything and everything, I would highly recommend buying this lens. Heck, I’d even go as far to say this is the best travel lens for Sony a6000 series cameras.

I’ll leave a link below so you can check it out for yourself. Thanks for reading, and I hope you enjoy it! 🙂

This article contains a few affiliate links. When you click-through our links to make a purchase, you get the same low price but I get a small commission which allows me to both survive and continue working on this website. Thank you so much! <3