It’s lackluster in many ways, but the compact size and some other features make up for its (rather extreme) optical shortcomings.

Although it was released in 2012, is the Sony a6000 kit lens still worth picking up for a low price today? Let’s dive into it.

Personally, I think the size of the Sony 16-50mm F3.5-5.6 is the redeeming factor of it. Measuring literally only 1.2 inches (30mm) long, it only extends to twice its size when fully zoomed, making it absolutely miniature. In addition, the sacrifices in build quality give it a very, very light weight of only 4.13oz (117g).

I’ve used this lens a lot over the years, and like I just said, the selling point for me personally is that it can literally fit into my pocket. It’s astounding how tiny it is, especially when you consider that Sony managed to cram both autofocus and optical image stabilization in there.

The build quality on this lens is certainly very lacking. Considering it was the kit lens from almost a decade ago, it’s built rather cheaply, and has no weather sealing. It’ll survive some bumps and scrapes, but it won’t be nearly as rock solid as, say, a G-series lens that is ten times the price (such as the 16-55mm F2.8). On the upside, however, it balances extremely well on a Sony a6000.

The Sony 16-50mm F3.5-5.6 delivers some pretty lackluster pictures, but the point of it isn’t to create incredible photos. At this price point, you’ll want to look at manual focus primes for that. The purpose of this lens is to shoot “good enough” pictures. Anyway, overall sharpness is fairly poor but its a somewhat versatile zoom range so there’s a bit to talk about in that regard.

At 16mm and F3.5, the frame is quite soft but the centers look somewhat decent. Stopping down to F8 will allow for the center sharpness to peak, but corners still look absolutely awful. At 35mm, center sharpness is pretty respectable still at F8, but corners are still a bit iffy. In general, this focal length is best for overall edge-to-edge quality.

At the tightest end of the focal range, 50mm, centers look pretty good, but corners look awful even when stopped down a bunch. To be honest, this is not the lens to get if you want sharp corners.

Autofocus on the Sony 16-50mm F3.5-5.6 is just alright. It won’t win any competitions when compared to a modern Sony lens, but it works decently and is reliable enough.

Don’t even bother trying to manually focus as the tiny ring (which can be switched between zooming and manual focus) is really difficult to use and you’ll never be able to lock good focus manually.

The power zoom function is a little weird, despite using this lens a lot in the past, still feels a bit awkward for me. Whether you turn the zoom ring itself or use the little floppy power zoom lever on the side, it just feels sluggish and slow.

As a redeeming factor to all of that though, the optical image stabilization works very well.

In my opinion, if you’re looking to simply shoot photographs and want to stay on a budget, I recommend either picking up a manual focus prime or picking up something like the Sigma 30mm F1.4 used.

That being said, for me at least, this lens serves one great function, and this is video. It’s incredibly small, has a versatile zoom range, and the image stabilization is excellent. While I wouldn’t use this for anything remotely professional, it’s good for simply recording video memories, and I know of a few people who use it for blogging and as a webcam replacement.

Quality isn’t the greatest, but it’s a small lens that has both autofocus and image stabilization, so it’s a fun little lens to learn the ropes on. If you’re interested in taking the (very budget) leap, I’ll include purchase links below. Consider buying it used. Thanks for reading! 🙂 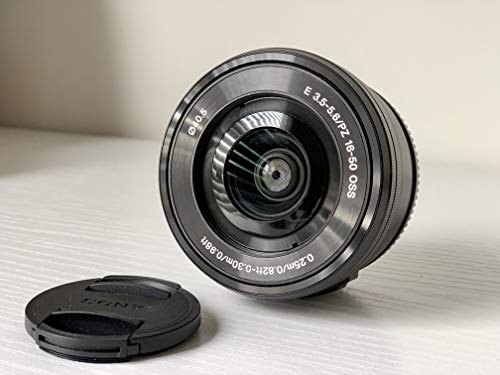 Some links on my website are affiliate links, which means I get a (very) small commission if you purchase something through one of these links. Thank you. 🙂