For a while, Sigma was known for having extremely sharp lenses that were, unfortunately, absolutely massive. In recent years, however, they’ve started to shift to a better balance of performance and weight.

In this particular review, we’ll be looking at the Sigma 85mm F1.4 DG DN, a small but mighty portrait lens.

So, in a focal length that offers a wealth of options, how does this mid-budget lens stack up? Let’s find out. 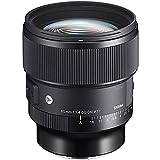 First up, let’s talk about size and weight. As I mentioned in the introduction, Sigma has started to shift more towards a “sharp AND lightweight” approach, and this lens is no exception to that.

It feels like it was actually purpose-built for compact mirrorless systems… because it was (unlike many of their prior Art series lenses).

As a fan of small kits, it’s really nice to see such a compact full frame lens. Unlike a lot of other bright aperture FF lenses, it actually fits in my small camera insert.

So, it’s small and relatively lightweight, but is it well built? Yep!

Sigma’s Art series build quality has always been excellent, and this lens continues that trend.

The barrel itself is a typical mix of metal and plastic. The plastic isn’t cheap crap though, it’s Sigma’s “thermally stable composite”, a type of strong polycarbonate.

My APS-C 30mm is built out of the same stuff and I’ve had zero issues with durability over the years, so I imagine this lens (and most other Art lenses) should be similar.

The lens hood is circular and slots in nicely. It has a nice ribbed section for easy removal, plus it’s reversible for storage.

There’s also a push-button type lock on the hood to keep it firmly attached.

Additionally, a little padded case is included, which really goes a long way in making the lens feel more premium.

You’ll find a typical gasket at the lens mount, good seals along the barrel, and a water-resistant coating on the front element.

Overall, the Sigma 85mm F1.4 DG DN feels built to last. I’m really happy that despite the much smaller size, they’ve managed to retain the excellent build quality that their older and larger lenses were known for.

As for ergonomics, the lens is a joy to use. Like I said before, I am a big fan of small kits, and this thing balances perfectly on my a7iii.

The (rather large) focus ring provides a nice gripping point, but to be completely honest you could easily shoot one handed with this thing.

Along the lens barrel are a variety of features, including a custom button, physical aperture ring, and an AF/MF switch. More on those features later.

As for aesthetics, beauty is subjective but I’m a big fan of the design language here.

The barrel is a couple different shades of dark gray that contrast extremely well with the rather minimal white text.

The aperture ring adds a really nice vibe, and the whole lens just feels and looks very premium to me. It’s sort of like a GM lens but without any of the red coloring or Sony branding.

Now we’re going to talk about sharpness. Being a Sigma Art lens, I expected great optics going into this, and I wasn’t disappointed.

I would like to note, real quick, that my sharpness tests don’t get very scientific. No complicated MTF charts or graphs, just extreme pixel peeping.

Anyway, shooting wide open at F1.4 nets great results, showing razor sharp centers with some moderate fall-off near the corners of the frame. Stopping down just a bit evens out the frame a bit more, and by the time we hit F2.8 the frame is literally flawless from edge-to-edge.

It’s incredibly impressive to me how Sigma managed to match the performance of their older 85mm F1.4 while making this new version half the size and half the weight.

So the lens is fantastically sharp, but does it suffer from any sort of optical quirks and flaws? Besides some distortion and vignette, not much.

The vignette is pretty heavy on uncorrected photos. That being said, it’s easily fixed in Lightroom.

A single click should remedy it, although you may run into issues with digital noise (due to pushing up EV) when shooting in very low light environments.

I personally found it to largely be a non-issue. A bit of vignette can often enhance a portrait anyway.

The situation is similar with distortion. Uncorrected photos show some serious pincushion distortion.

It’s quite heavy but can once again be fixed easily with a couple clicks in post-processing. Of course, due to the “stretching” of the pixels, you’ll lose a bit of resolution, but I found it to not be a problem (this lens is already razor sharp as it is).

Chromatic aberrations are not an issue whatsoever.

Even in extreme cases (such as tree branches against a bright sky), I was unable to find any sort of heavy fringing.

Even shooting directly into sunlight, this lens was able to handle flaring quite well with only MINOR loss of contrast and virtually no ghosting.

And now onto bokeh! As you’d expect from an 85mm F1.4 lens, the Sigma produces some gorgeous bokeh.

Backgrounds are creamy, although the bokeh balls tend to take on a minor cats-eye shape near the edges.

Subject isolation is excellent, and I’d have no reservations about using this lens for professional, paid shoots.

Overall, I’m quite impressed with the optical performance of this lens.

The Sigma 85mm F1.4 DG DN puts out incredibly sharp images and, despite a bit of vignette and distortion, suffers from very few optical flaws.

The bokeh has plenty of character, and I don’t think even the most extreme of pixel peepers could find any substantial flaws with image quality.

Next up, let’s focus on focusing. When I look at newer lenses, I tend to not delve too deeply into their autofocus performance as most modern lenses perform “well enough”.

It plays quite well with Sony’s AF assists such as EyeAF (very, very accurate) and AF-C.

Video shooters will be happy to know that the autofocus is so silent it doesn’t even get picked up by the onboard mic, let alone a dedicated microphone.

Focusing is also internal (as you’d expect), so filters (77mm thread) won’t rotate as the lens is refocused.

The biggest caveat to video AF is that the lens does demonstrate a small degree of focus breathing. This may not be a dealbreaker for most, but I figured it was worth mentioning.

By the way, it looks like Sigma released firmware at some point to beef up the autofocus performance. If your copy is slow or inaccurate, check their website for an update.

As for manual focus, I actually found the lens to be enjoyable to use. Usually, modern AF lenses pale in comparison to dedicated manual glass.

The lens is focus-by-wire but it feels well dampened and quite precise.

Focus peaking works quite well and spinning the focus ring will automatically engage the magnifier.

Again, not quite comparable to a full manual lens, but still really usable and useful.

There’s actually a lot to unpack here. The ring works how you’d expect, it’s well dampened but I found myself bumping it on occasion.

First off, there’s a physical switch to change the ring from clicked to declicked.

I vastly prefer clicked myself but I understand many users (especially videographers) prefer declicked.

Another neat feature is the “aperture lock”. This allows you to lock the aperture in a few different ways. First, you can lock it to avoid accidentally switching into auto mode.

On the flipside, you can lock it in auto mode and control the aperture straight from the camera as usual.

This is a great feature, as it allows users who dislike physical rings to completely ignore it and continue changing aperture from the camera as they’ve always done.

Finally, there’s a custom button on the lens barrel much like Sony’s GM lenses.

This is rather straightforward. It’s default function is “focus hold”, but it can be reprogrammed to any function in the settings menu.

I’ve always been a fan of lens-based custom buttons. The more customization the better, in my opinion.

Although the Sigma 85mm F1.4 DG DN is excellent, I always like to offer a couple of alternatives before I finish off my reviews.

Below I’ll list a few options at different price points. Two from Sony, and two from third-party manufacturers.

The most direct comparison to this lens would be the Sony FE 85mm F1.4 GM.

It goes without saying that the G-Master lens is the best of its class. Excellent sharpness, build quality, autofocus, literally everything is fantastic.

The caveat though: it’s substantially more expensive than this Sigma. I personally don’t think the GM lens is worth the cost difference.

Next up is the Sony FE 85mm F1.8. You lose a bit of light, but it’s also substantially cheaper.

Expect solid build quality and great imagery, but not quite on the same level as the Sigma.

Still a FANTASTIC option if you’re on a budget, though. You can check out my review here.

A much cheaper F1.4 option would be the Samyang 85mm F1.4. To be frank, Samyang makes a lot of questionable-quality lenses, but this one is an exception.

Expect great image quality, a rather cheap (but weather sealed build) and a much lower pricetag. A decent pick if you’re looking for F1.4 on a budget.

Finally, the Viltrox 85mm F1.8 is an excellent option if you’re looking to spend the least amount of money possible while still getting good optics.

It’s a solid budget pick for those looking to not spend much. Feel free to check out my review on it.

Is it worth the purchase?

So, in light of all those alternative lenses, do I still recommend the Sigma 85mm F1.4 DG DN? Wholeheartedly, yes.

It falls squarely into the mid-budget category, yet still offers image and build quality that is essentially on par with it’s much more expensive Sony GM rival.

If you’re looking to pick up an excellent portrait lens but don’t want to drop buckets of cash on GM glass, the Sigma is the way to go.

If you’re sold on this (wonderful) lens, I’ve included some purchase links below.

You can find them readily available on Amazon or B&H. However, if you’re looking to try before you buy, consider testing it out at Lensrentals.

By the way, if you purchase through any of my links, I get a (very small) commission at no extra cost to you. Thank you for your support and thanks for reading!