Of all the focal lengths in photography, 50mm likely has the most lens options out of any. Whether you shoot full frame or APS-C, there’s dozens of 50mm lenses out there.

In this particular article, we’ll be looking at the Sigma 50mm F1.4 DG HSM Art. Although originally released for DSLRs, Sigma soon modified it to be compatible with Sony’s mirrorless system.

So, in such a competitive focal length, how does this lens compare? Let’s find out. 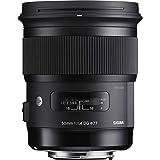 So, first up let’s talk about size and weight. Unlike some of the other DG HSM lenses I’ve reviewed, this 50mm manages to stay reasonably sized.

Still, it’s massive compared to a smaller alternative like the manual Voigtlander 50mm F2.0. This definitely isn’t the kind of nifty fifty you can put in your pocket.

From what I understand, it seems like Sigma took the DSLR version of the lens and just attached a built-in adapter. So that partially explains why it’s so big compared to many other 50mm options.

So it’s extremely heavy, so that must mean it’s built well, right? It sure is!

The barrel, being entirely made out of metal, feels great in the hand. The petal-shaped lens hood is plastic, but absolutely does NOT feel cheap. It’s reversible for easy storage, and has a great grippy surface for easy removal. Something to note, however, is that the lens hood adds a LOT of extra length (a couple inches).

The glass elements in this lens are heavy-duty. I obviously didn’t disassemble it to take a closer look, but you can just tell by holding the lens that the entire thing is just spectacularly built.

As an extra touch, a lens case comes included. While this may seem minor, it really shows that Sigma views this as a premium product that is worth protecting.

So is the Sigma 50mm F1.4 DG HSM lens built to last? I’d say absolutely. The only thing that concerns me is the lack of weather sealing.

As for aesthetics, I find this lens to be gorgeous. Looks are subjective of course, but this lens gives me such a premium vibe.

You have some small “Sigma” branding near the bottom, a grayed out serial number, and of course the iconic Sigma “A”. The distance scale looks fantastic, and the AF/MF switch protrudes from the barrel a bit but still looks nice and unobtrusive.

Ergonomically, this lens is, once again, quite heavy. However, I still found that it was fairly comfortable to use on a long shooting session. I’m not sure I’d take this thing up a mountain with me, but for photoshoots it’s great.

With bigger lenses like this, I generally have one hand on the camera and one hand on the lens. It balances decently well on my Sony a7iii, even if it is a bit front-heavy.

Next up, we’re going to talk about sharpness. The Sigma 50mm F1.4 DG HSM is a few years old, but it still delivers great results.

Shooting wide open, we see good sharpness all across the frame, with only minor fall-off near the corners. Stopping down just a bit makes the lens shine, offering much better performance at F2.8 and spectacular quality from edge-to-edge at F5.6.

To be honest, image quality wide open isn’t flawless (it’s still great, though), but stopping down just a bit delivers spectacular results that are on par with pretty much any other comparable lens.

As for optical flaws, this lens suffers from a few issues, namely vignette and chromatic aberration.

Although chromatic aberrations are largely well controlled, fringing can show up when shooting high contrast situations such as tree branches or subjects against bright skies.

In most cases, they were not noticeable. When aberrations did show up, I was able to usually remedy it in post-processing with a couple clicks.

Vignette is very strong when shooting wide open, but stopping down even to just F2 completely remedies it.

I could see this being an issue if you’re trying to shoot in a very low light environment, as fixing the vignette in post may introduce extra digital noise.

Distortion was not an issue whatsoever. Generally 50mm lenses have a bit of distortion, but this one is flawless.

When shooting into direct light, the lens holds contrast really well and I didn’t notice any sort of issues with flare.

Bokeh is a very subjective topic, but a 50mm F1.4 has to have lovely bokeh, right?

There’s great subject isolation, but the bokeh can get a bit chaotic and “nervous” in the transitional areas.

Other than that, I didn’t find any sort of warping or “cats-eye” bokeh near the corners.

Sharpness is spectacular when stopped down (although still quite good when wide open). Chromatic aberrations and vignette aren’t perfect, but they’re not deal breakers. Flaring and distortion are non-issues.

Bokeh is gorgeous, if a bit nervous.

Next up, lets focus on focusing. I generally don’t dig to deep into autofocus, as most modern lenses provide more than satisfactory results.

I got what I expected out of the Sigma: autofocus that is quick enough, reliable, and rarely hunted (some issues in low light). The focusing motor is whisper quiet, as the HSM (“hyper-sonic motor”) marketing implies.

Those who use filters (77mm thread by the way) will be happy to know that all focusing is done internally, thus the front element doesn’t rotate when refocusing.

Overall, quite satisfied with the autofocus. It works as well as I’d expect and there’s no surprises.

My fellow manual focus enthusiasts will be delighted to know that this lens offers a great MF experience.

First of all, the focus ring is absolutely gigantic. There’s a full-time manual override, so simply spinning the lens will turn off the AF system, but there’s also a dedicated switch as well.

The ring feels well dampened but has an incredibly short focus throw, which is great for quick refocusing, but can make it hard to get super precise focus.

The lens works flawlessly with Sony’s excellent focus assists such as peaking and magnifier. The focus scale, although I rarely physically look down at it, can be super helpful for “set and forget” type shooting.

Overall, super pleased with the MF experience. Although not quite comparable to a dedicated manual lens, it’s still one of the best manual rings I’ve used on an AF lens.

While my copy of the lens was flawless, I’ve heard of other users getting duds that have focus issues.

If you order this lens, I would highly suggest taking it out for some extensive and difficult testing (high contrast, low light, high-speed action) to see how the AF is working.

For what it’s worth, it looks like most of these reviews came from owners of the Canon & Nikon versions, so it’s possible that Sony users wouldn’t be affected with our generally superior AF system.

Either way, if you have problems with that lens, I’d consider contacting Sigma directly and discussing a replacement (or return).

Finally, before we finish out the review, I want to touch on a few alternatives (there are many).

This is the lens you go for if you want the absolute best with zero compromises.

Expect incredibly fast focus, unmatched image quality, and, unfortunately, a steep price tag. If you can afford to drop thousands of dollars on a lens, go with the Sony G-Master.

If you’re looking for something a lot cheaper and smaller, consider the Sony FE 50mm F1.8.

Although the focus is slower, build quality is lackluster, and it won’t be quite as sharp, you’ll still get fantastic results whilst paying 1/4 the price.

Looking for some premium glass instead? Consider the Voigtlander 50mm F2.0.

In a league of it’s own, the Voigtlander is entirely manual focus, but offers spectacular sharpness and (especially) build quality.

It’s quite expensive, but think of it as the Gucci of camera lenses.

I’ve personally owned a few lenses from Meike and, while cheap, they’ve surpassed my expectations.

So, with all these great alternatives, is the Sigma 50mm F1.4 DG HSM still worth picking up? Honestly, I’d say so.

It offers a great mix of premium build and great image quality while still managing to stay relatively affordable. If you don’t want a “low budget” lens but also don’t want to spring for a G-Master, this Sigma is a fantastic compromise between the two.

If you’re interested in picking it up for yourself, I’ve left purchase links below. Thank you for reading. 🙂