In the last couple years, Sigma has continued putting out more and more “I-series” glass, aka compact yet sharp lenses.

In this particular review, we’ll be looking at the Sigma 35mm F2 DG DN, releasing just a couple years ago in late 2020.

In the crowded 35mm focal length, how does this little lens stack up against competitors? 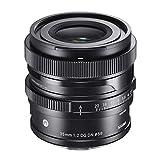 First up, I want to talk about size and weight, as the compact dimensions are one of the main selling points of Sigma’s new series of lenses.

Length-wise, we see a measurement of about 2.7in (6.7cm). While not as small as certain lenses, that’s still QUITE compact, especially on a full frame system.

As for heft, the Sigma 35mm F2 weighs in at about 11.5oz (325g). It feels like it’s just the right size/weight combo to balance quite well on my camera.

I’ve said it before in a lot of my reviews, but lenses like this are the kind of glass that originally got me to switch away from bulky DSLR setups many years ago.

So, it’s small and actually pretty lightweight, but is the build quality sacrificed? Not really, to be honest.

First up, the lens barrel is made completely of metal. I absolutely love this.

There is absolutely no plastic to be seen anywhere.

Even the circular lens hood is entirely made of grooved metal (making it easy to grip and remove).

Though, to be honest, it’s quite large and adds roughly an inch to the total length of the lens.

Believe it or not, the lens cap is metal too. Well, kinda… there’s actually two different lens caps.

One of these caps is a stereotypical pinch-style plastic cap. It does the job just fine.

The other is a metallic cap that magnetically attaches to the front of the lens. Sigma even includes a little lanyard to store this magnetic cap.

To be frank, I think this could be seen as a bit gimmicky, but it’s always fun to see manufacturers breaking the norm.

As for weather sealing, the lens does offer a gasket around the mount, but unfortunately lacks any other sort of sealing.

This doesn’t surprise me, as this lens is clearly less catered to “pros” and designed more for those who just want something compact but well built.

It’s build like an absolute tank and feels great in the hand, plus the overall look just gives off such a premium vibe.

The lack of weather sealing gives me a bit of hesitation, but if you don’t take it out in any insane conditions I doubt you’d have any problems.

Aesthetically, I absolutely adore Sigma’s recent lineup of lenses. I’ve used a lot of vintage glass over the years, and this Sigma gives me similar vibes.

The all-metal build, sleek black design, and large rings (both focus and aperture) just look and feel so fantastic.

As for ergonomics, the lens is balanced well (as I mentioned) and it feels pleasant to use.

The large focusing ring makes for a nice gripping point, and it’s light enough to where I didn’t tend to suffer from any hand fatigue over time.

I’ve had no problems tossing it in my backpack haphazardly, and it also fits in my camera insert just fine.

So, it’s all-metal, beautiful, and compact, but how’s the image quality?

My tests don’t tend to get super scientific (no MTF charts or anything like that), so don’t expect anything too complicated. I mostly just pixel peep.

To start, the Sigma 35mm at F2 is incredibly sharp. Usually, lenses wide open are a bit lacking, but that’s definitely not the case here. I’d have no hesitations about using F2 in pretty much any circumstance.

Stopping down does little to improve the sharpness (it’s already great), but it does do a LOT for color rendition and contrast. It’s hard to explain, but images just “pop” more when you tighten the aperture.

As for optical quirks and flaws, the lens suffers from very little.

First up, vignette is fairly strong when shooting wide open, but it’s easily fixable in post-processing.

Generally, stopping down would remove vignette, but it seems to persist all the way to F5.6. It’s not major enough to be a dealbreaker, but it may end up introducing digital noise in low light conditions (due to having to push up the exposure).

Otherwise, the Sigma 35mm F2 is mostly free of other issues. Distortion is minor (about 2% barrel) and flare control is fabulous.

When shooting wide open, minor (but noticeable) chromatic aberrations pop up in high contrast areas, but stopping down slightly (or clicking one button in Lightroom) remedies them.

Overall, really impressive performance out of a mid-budget lens that’s so small. Even the bokeh is pretty decent (for being 35mm).

Frankly, after using so many Sigma lenses over the years, this is what I’ve come to expect. Despite any other flaws, Sigma’s glass has never failed to be razor sharp.

Next up, we’re going to focus on focusing (see what I did there?).

Most modern lenses tend to have what I would consider “excellent” autofocus, and the Sigma 35mm F2 is no exception.

It’s quick and reliable, and I didn’t have any notable issues with hunting (even in low light situations).

For video use, it’s not quite as perfect, but still good. Still fast and reliable, but there is a bit of noise.

Not a lot of noise, mind you, but enough to where the on-board mic on your camera would likely pick it up. If you use an external microphone though (which you should), it won’t be an issue.

There’s a bit of focus breathing but, besides that, the lens was pretty darn reliable for video AF.

Manual focus is where Sigma really hit the mark. Generally, a lot of modern AF lenses can feel a bit lackluster when compared to dedicated manual glass.

Sigma, however, did a great job at designing the focus ring to feel “just right”. There’s plenty of tactile feedback and, despite the lack of hard stops, I found it easy to grab focus quickly.

There’s also a physical AF/MF switch, which is always welcome.

Once again, when you switch the lens to manual, it really feels like you’re using a vintage lens. All-metal, buttery smooth and precise focus, I love it.

Of course, you can still set it to “auto” and control aperture through the camera, but I’ll always use a ring when given the chance.

It is clicked, which may be a sour point for video users, but I’ve always loved clicked rings myself.

So, now that I’ve sung the praises of this lens, I do want to offer some very competitive alternatives for your consideration.

Unsurprisingly, the Sony FE 35mm F1.4 GM is the most “superior” competitor to this lens.

It is, however, substantially more expensive and MUCH bigger.

If you’re looking for something a little cheaper, check out the Rokinon 35mm F1.8.

It’s a great lens, but don’t think it can match the image or build quality of its more expensive counterparts.

Speaking of cheaper, if you really want to cut costs, consider the tiny Samyang 35mm F2.8.

Although not super cheap, the lens provides fantastic image quality, a great build, and a really premium feel for a price that many would consider “mid-budget”.

If you’re looking for a compact yet sharp lens, the Sigma is the way to go. I’ll leave a purchase link below so you can check it out yourself. Thanks for reading! 🙂

79 Reviews
Sigma 35mm F2 DG DN
A small lens that is as beautiful as it is sharp. A fantastic mid-budget pick for anyone.
Check Price