Sigma’s Art lineup is a classic series of lenses that have been dominating the photography space for quite a few years at this point.

Today we’ll be looking at the Sigma 24mm F1.4 DG HSM, a wide angle lens with a bright max aperture. Although released back in 2015, it was recently retrofitted to work with Sony’s mirrorless system.

So how does this lens stack up against other competitors? Let’s find out. 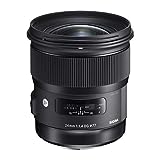 In order to make these older lenses compatible with mirrorless, Sigma pretty much just attached a built-in adapter to their DSLR lenses.

For this reason, DG HSM series lenses are gigantic as they are essentially just DSLR lenses with an adapter attached.

The Sigma 24mm F1.4 DG HSM itself comes in at 5.1in (12cm) and weighs a hefty 23.5oz (665g). Attaching the lens hood adds another inch or so. When compared to something like the Sony 24mm GM, this lens is absolutely massive.

To be frank, the size & weight of these converted lenses are the biggest negative points for me. The reason I originally got into mirrorless cameras was to shed weight from my huge Canon setup.

It’s large and super heavy, so that must mean it’s built quite well, right? As a matter of fact, yes it is.

The lens barrel is made mostly out of metal, with little bits of plastic (high quality polycarbonate so not cheap garbage). It feels incredibly premium to hold in the hand.

The glass elements in the lens are also heavy-duty. I obviously didn’t take it apart, but you can just tell by holding the thing that it’s well-built even on the inside.

The petal-shaped lens hood is plastic, but it does not feel cheap. It’s reversible for easy storage as with most Sigma lenses. Additionally, a nice little lens case is included, which really seals in the premium vibe.

Sadly, the lens lacks full weather sealing. The newer Sony version does have a mount gasket for “additional dust and moisture protection”, but that’s not a substitute for full sealing. Don’t take this out in a rainstorm, folks.

Overall, this lens is an absolute beast and definitely feels built to last. The main thing that concerns me is the lack of full weather sealing, but that’s easy to overlook if you don’t plan on shooting in extreme conditions.

The barrel starts off sleek black near the lens mount, but switches to dark gray as it tapers off into the center. The focus ring is large and ribbed, and the front of the lens is a giant abyss of glass.

A small bit of Sigma branding, a grayed-out serial number and the name of the lens are the only text engravings. The Sigma Art “A”, focus scale, and AF/MF switch adorn the rest of the body, leading to a minimalist but functional vibe.

Ergonomically, the lens is definitely a bit unwieldy. It’s large, especially on my a7iii (very front-heavy), meaning it can start to get exhausting on longer shoots.

As with most large lenses, I suggest one hand on the camera and one hand on the lens. I personally wouldn’t drag this thing up a mountain, but for shorter shoots it’s totally fine.

Sigma Art lenses are known for their sharpness, and the 24mm F1.4 is no exception. My sharpness tests tend to not get very complicated, I usually just crop in and pixel peep.

Shooting entirely wide open, centers are razor sharp but there is quite a bit of fall-off near the corners. This would be an issue for typical wide work (architecture, landscape, etc.), but isn’t a problem for center-focused subjects. It’s unlikely you’re shooting landscapes at F1.4 anyway.

Stopping down evens out the frame a lot, showing pretty consistent sharpness from edge-to-edge even at F2.8. Here’s the issue though: field curvature. Some field curvature is noticeable if you pixel peep. Despite that, it’s still razor sharp in the areas that ARE in focus.

Overall really great performance. Not super happy with the field curvature, but with a wide angle lens I’m not super surprised. I’d suggest shooting at least at F2.8 or tighter to get as much into focus as possible.

The Sigma 24mm F1.4, like any lens, has a few optical flaws and quirks (in addition to the field curvature).

First up, distortion is incredibly minor for a wide angle lens, but it’s still present and worth talking about.

Some of the lowest distortion on a 24mm I’ve ever seen.

At wide apertures, this lens suffers from a pretty heavy vignette. Expect roughly a -2EV vignette when shooting wide open.

Stopping down, however, quickly remedies the problem. I found that at F2.8 the edges of the frame were pretty much perfect.

Chromatic aberrations are nearly a non-issue.

I didn’t notice anything but some very minor green fringing in extreme situations.

Flare resistance is overall quite fantastic, and I rarely had any issues.

You should be able to shoot directly into sunlight with virtually no ghosting or flaring.

Although bokeh may not come to mind when you think about a 24mm, I still think it’s worth mentioning.

The minimum focus distance is roughly 9.8in (25cm), so you’re able to get some dramatic close-up wide shots.

The bokeh balls themselves are nice, and don’t suffer from any sort of major warping (like cats-eye) near the edges.

Although I’m not happy about the field curvature, sharpness is still spectacular. I’d just be cautious about shooting wide open.

Additionally, the lack of any major optical quirks (barring the vignette) is a positive point for this lens.

Next up, let’s focus on focusing. I usually don’t dig to deep into autofocus, as most modern lenses offer “good enough” performance.

This Sigma performed how I expected: quick, reliable, with minimal hunting. The “hyper-sonic motor” marketing is accurate as the focus is whisper quiet.

This lens plays quite well with Sony’s excellent focus assists such as EyeAF and AF-C (continuous AF).

The lens focuses internally, so filter users will be happy to know they won’t have to worry about readjusting variable filters after refocusing.

Overall, quite satisfied with the AF. No issues for me.

As for manual focus, I liked it. The focus ring is gigantic and well-dampened, making accurate focus a breeze.

The physical AF/MF switch is nice (I hate digging through menus) and the lens plays very well with Sony’s various focus assists such as magnifier and peaking.

There is a distance scale on the lens barrel, but I found I rarely use that as the in-camera assists are so great on their own.

Overall, really good MF experience. Not comparable to a dedicated manual lens of course, but I’m happy with it.

Being a wide aperture lens, some photographers may think to use it for astrophotography.

To be completely blunt, this thing shows heavy coma. Stars near the edge of the frame have large tails.

Don’t buy this if you want to do astrophotography, instead take a gander at my article on the Sigma 14mm F1.8.

I saw a lot of complaints here and there about focus issues. While mine seemed to focus accurately, it’s still worth testing your copy of the lens.

For what it’s worth, most of those reviews came from Canon/Nikon users, so we may not have to worry about focus issues on Sony.

I mentioned field curvature a lot in earlier parts of the article, but it really wasn’t terrible overall.

There are definitely some shots that I noticed had decentering, but 99% of pictures came out totally fine.

Maybe I just got lucky and got a copy that wasn’t a flop. If you order this lens, make sure to test for decentering while you’re still in the return period.

Before we finish out the review, I want to offer various alternatives at different price points.

The Sony FE 24mm F1.4 GM is the closest competitor, offering similar performance but with a much smaller build.

While the smaller size of the GM lens is appealing, I’m not sure it would be worth the (massive) price difference to most photographers.

Although only F2.8, the Sigma 14-24mm F2.8 is a decent alternative if you’re looking for something a little more versatile.

Being a zoom, don’t expect quite the same level of optical performance.

For a slightly cheaper option, consider the Samyang 24mm F1.8.

While it won’t match the Sigma in terms of image quality (or build, for that matter), it’s still a great competitor that is worth considering if you want to save money.

This last one is for the ultra budget-conscious. With the Tamron 24mm F2.8, you lose a couple stops of light and, undoubtedly, lose some image/build quality.

However, it’s dirt cheap and incredibly small. Admittedly, I’m a big fan of this lens for the size alone.

If you want excellent quality but can’t afford the GM lens, this Sigma is a great middle-ground between expensive & budget.

Fantastic sharpness, built like a tank, reliable autofocus, and a reasonable price tag all come together to make this a great mid-budget pick. Just remember to test for decentering and focus issues like I had mentioned earlier.

If you’re interested in picking it up for yourself, I’ll leave purchase links below. Thanks for reading.