In recent years, Sigma has been dominating the third-party lens market, pushing out excellent glass constantly. Consumer responses have been overwhelmingly positive (with the exception of a few duds).

In this particular article, we’ll be looking at the Sigma 20mm F1.4 DG HSM Art. Although originally a DSLR lens, Sigma ported it over to Sony recently.

So, how does this mid-budget lens stack up against its competitors? Let’s find out. 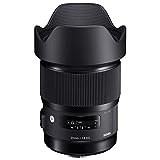 For most of the DG HSM lenses, Sigma simply attached a new built-in adapter to convert them from DSLR to mirrorless.

For this reason, these lenses tend to be massive and heavy, and the 20mm F1.4 is no exception.

Weighing a hefty 33oz (935g) and measuring a length of roughly 5.1in (13cm), it’s smaller than some other Art series lenses, but still absolutely gigantic compared to most competitors.

It seems Sigma took the approach of “quality over size” with this lens. While this isn’t necessarily bad, a lot of Sony users (myself included) got into the mirrorless system to escape giant DSLR setups.

So all that weight means it’s got to be built like a tank, right? Yep.

The lens barrel is made out of a mix of metal and high quality plastics (“thermally stable composite”). Some may assume that plastic components are always cheap or flimsy, but it’s the same material a lot of other Sigma lenses have had, and I’ve rarely had issues with long-term durability.

Inside the lens, the glass is extremely heavy-duty. I mean seriously, look at how massive that bulbous front element is. 15 elements in 11 groups means there’s a LOT of glass in there.

The petal-shaped lens hood is also made out of the same plastic composite material. It feels strong, but is permanently attached and thus not reversible for storage (the included lens cap is a slide-over type, as opposed to a pinch-cap). Also included is a padded carrying case, which really seals in the premium flair.

Unfortunately, one major point where Sigma missed the mark is with weather sealing. There is absolutely no weather sealing in this lens, not even a mount gasket for dust/moisture protection.

Aesthetically, the lens looks like all the others in the Art series, which I think is a good thing.

Starting off small at the mount, the lens tapers out to get bigger and bigger, making subtle material changes along the way (metal, into plastic composite, back into metal, etc.).

The text engravings are minimal and unobtrusive, contrasting nicely with the various shades of gray along the lens barrel. The iconic Sigma “A” badge sits prominently to the left of the distance scale, really sealing in that premium vibe.

As for ergonomics, the lens is massive but it’s fairly comfortable to handle in the field. While I wouldn’t take it up a mountain with me, for shorter photoshoots it’s totally fine.

My usual advice with lenses like this is to grip the camera with one hand and the lens barrel with the other. Conveniently, the focus ring is absolutely gigantic, which makes a great grippy spot to grab onto.

Next up, we’re going to look at sharpness. The Sigma 20mm F1.4 DG HSM continues the Art series tradition of being extremely sharp.

Peak sharpness seems to be at F4, where the whole frame is just flawless from edge-to-edge.

For those who know anything about Art series lenses, the spectacular sharpness shouldn’t come as a surprise.

Sharpness aside, every lens suffers from at least a few optical quirks, and the 20mm F1.4 is no exception.

First up, there’s a little bit of distortion as is typical of wide angle lenses.

I was able to get it mostly corrected with a single click in Lightroom, so it shouldn’t be a huge concern.

Second, the lens suffers from some major vignette when shooting wide open. At F1.4, you’ll see about 3 stops of vignette around the corners.

While this may not be an issue when you have a lot of light to work with, in higher ISO situations that corner darkening can lead to some serious digital noise when corrected in post.

Still though, if you’re shooting photos in good light, it, again, really shouldn’t be a huge concern.

On the flipside, the lens suffers from virtually zero issues with chromatic aberrations.

Even when shooting particularly rough situations (tree branches against a sunlit sky), I found very very little fringing that couldn’t be easily corrected in post.

Flaring is also quite minimal and only prevalent in extreme cases.

When shooting into direct sunlight, there is minor ghosting but virtually no loss of contrast.

Also, by the way, stopping down creates some beautiful sunstars.

Despite some minor softness wide open, sharpness is as spectacular as you’d expect on an Art series lens.

The vignette can be a bit of a concern if you primarily shoot in low-light environments, but otherwise the lens is optically quite perfect.

Next up, let’s focus on focusing. I usually don’t dig super deep in autofocus, as most modern lenses perform quite well.

The Sigma 20mm F1.4 DG HSM performed pretty much how I expected: quick, reliable, with minimal hunting issues. The focus is also whisper quiet thanks to the “hyper-sonic motor” (HSM).

Sony’s excellent AF assists work quite well, with EyeAF being pretty accurate and continuous AF (AF-C) nailing focus pretty consistently. Not quite on the same level as an OEM Sony lens, but definitely good enough.

Do note that if you’ve read any other reviews of this lens, you’ll find complaints about AF accuracy. I found that those mostly seem to be from Canon & Nikon shooters, so I assume that Sony’s superior AF system just avoids many of the issues that other systems struggle with (I didn’t have any major problems).

Overall, I’m quite satisfied with the AF on this lens. Again, not quite on the level of an actual Sony lens, but totally good enough.

My fellow manual focus enthusiasts will be happy to know the MF experience is quite enjoyable.

First of all, there’s a physical AF/MF switch, which I always like having (I hate digging through menus).

The focus ring is absolutely gigantic, and has about a 100 degree focus throw. I find this to be quite a good sweet spot for quite yet precise focusing.

The lens plays well with Sony’s excellent focus assists such as peaking and magnifier. The distance scale works well but I rarely used it, as I usually just rely on peaking anyway.

So, while maybe not comparable to a dedicated manual lens, I really enjoyed the MF experience on the Sigma.

Next up, I want to make a quick mention about filters.

Due to the large curved front element, the Sigma 20mm F1.4 DG HSM does not support filters.

This is a HUGE bummer for those looking to do landscape photography, as many situations demand filters (polarizers, ND, etc.).

I think this fact alone will likely drive potential buyers towards alternatives. Speaking of alternatives, I’ve gone through quite a few of them near the bottom of this post.

Given that this is a wide-angle lens with an F1.4 aperture, it’s garnered quite a bit of hype in the astrophotography community.

Coma performance is pretty good, but definitely not flawless. Near the corners, you’ll see some star trails, but it’s fairly hard to notice unless you’re pixel peeping. Stopping down slightly will mostly remedy the tails.

There’s not much more to say in terms of astro. Coma performance leaves a lot to be desired, and if you’re looking for a dedicated astro lens, perhaps consider reading my review of the Sigma 14mm F1.8.

The Sigma 20mm F1.4 DG HSM is a great lens but it isn’t without its flaws. For that reason, I’d like to offer a few alternative choices before we round out the article.

This lens is arguably the closest comparison to this Sigma. It offers similar image quality, a spectacular build, and is also substantially smaller.

Consider the Sony FE 20mm F1.8 if you’re willing to pay a bit more for a comparable lens that’s much more compact and lightweight. Plus, it actually supports filters…

Although not quite comparable, the Sony FE 24mm F1.8 GM is pretty much the absolute top of the line when it comes to this focal range.

It’ll offer similar (if not better!) image quality, top-tier build quality, blazing fast AF, and a smaller size. You get what you pay for, however, as it’s much more expensive than any other lens on this list.

The Sigma 24mm F1.4 is quite the comparable lens in many ways. Both the 24mm and 20mm offer very similar image quality, builds, and price tags.

The 24mm is a bit bigger and heavier (if you can believe it), but it’s a worthy pick if you’re looking for something just a little bit more tight. Check out my review on it for more information.

Previously mentioned in the astrophotography section, the Sigma 14mm F1.4 (read my review here) is the way to go if you’re looking to capture the night sky.

You lose some light, sure, but it’s also much wider and doesn’t suffer from the kind of coma issues the 20mm F1.4 does.

Next up, we’re starting to dive into low-budget territory. The Samyang 24mm F1.8 offers a cheaper alternative to all the aforementioned lenses.

It won’t blow you away with sharpness or build quality, but it’s affordable and definitely a worthy value for what you get.

Finally, the most budget option: the Tamron 20mm F2.8. You won’t be getting nearly as much light out of this one (F2.8), but it’s still a nice budget option as a general walk-around wide angle.

I wouldn’t expect mind-blowing sharpness or autofocus speed, but it gets the job done.

So after all those alternate options, is the Sigma 20mm F1.4 DG HSM still worth the purchase? For some people, yes!

The combination of the 20mm focal length and F1.4 aperture are just simply not offered by any competitors. However, there’s not many occasions where you need that bright of an aperture at this wide of a focal length.

For this reason, I think a lot of photographers will be better off looking at my previously mentioned alternatives. Personally, I feel like the Sony FE 20mm F1.8 G offers a lot more for your dollar than this Sigma.

Regardless, I don’t think you can go wrong with either, so I’ll leave purchase links to both this Sigma and the Sony below (keep scrolling for B&H) for your consideration. Thanks for reading. 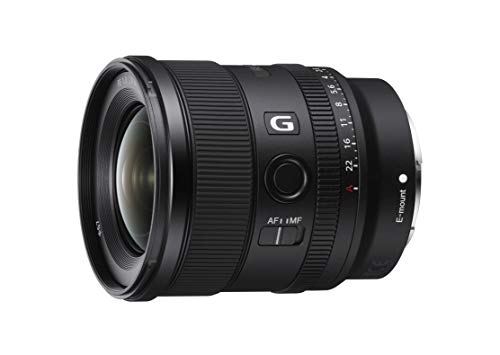 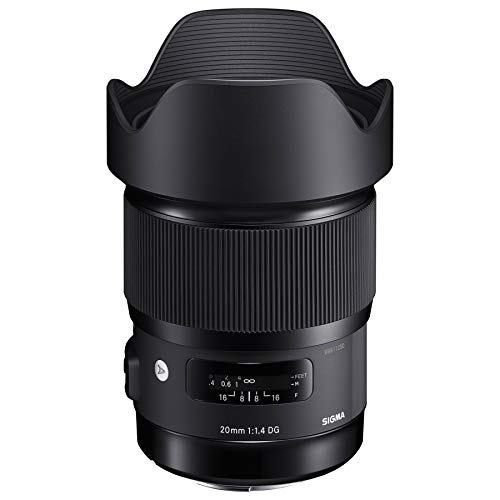