Over the lifetime of Sony’s APS-C (a6000) lineup, Sigma has put out some really incredible lenses, namely the iconic Sigma trio.

Now, Sigma is back yet again with a versatile zoom that is both small and mighty, offering solid performance with a compact build.

The Sigma 18-50mm F2.8 DC DN Contemporary is supposedly the “world’s lightest and smallest F2.8 zoom lens”. So is it worth the price tag? How does it stack up against higher priced competitors? Let’s dive in. 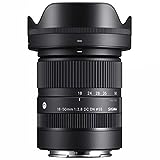 So, let’s first talk about one of the main strong points of this lens: the size & weight.

Despite having a versatile range and a fixed F2.8 aperture, Sigma has managed to make this lens quite small, coming in at only 2.9 inches (7.3cm). This is rather incredible when you consider that it matches the size of even some prime lenses, such as the Sigma 30mm F1.4. It should be noted that the barrel does extend roughly another inch (2.5cm) when extended to the end of its zoom range.

As for its heft, I’m generally less concerned about weight versus size, but this compact zoom weights a rather conservative 10.2oz (289g). While this isn’t incredibly light, it is, again, quite impressive for a zoom lens with these specs.

Overall, I’m quite impressed with how Sigma has managed to build a fixed aperture zoom lens that’s this small. These are the kind of lenses that shine on compact mirrorless cameras like my Sony a6000. I think this may become my new favorite travel lens.

Next up, we’ll look at overall build quality. The Sigma 18-50mm F2.8 is made out of “thermally stable composite” which is just Sigma’s way of saying high quality plastic. While I haven’t been able to test the longevity of this lens specifically, the Sigma 30mm F1.4 shares the same material and has lasted me over four years with no issues.

Included with the lens is a bog-standard petal shaped lens hood. It does its job well enough, protecting the front element from smudges, bumps, and flaring. It’s reversible and, despite being made of plastic, is pretty durable. The hoods on my other Sigma lenses have held together quite well over the years so I expect this one to be similar.

As for weather-sealing, the lens does offer a rubber gasket around the lens mount, but nothing else. Either way, this is still nice to see for an APS-C lens, especially at this price point. I wouldn’t trust bringing it into anything extreme, but I’ve shot in rain and snowstorms with plenty of completely unsealed lenses in the past without any issues, so I imagine the Sigma will do just fine in moderate conditions.

Overall, I’d say the lens definitely feels high quality and built to last. As I mentioned prior, I’ve owned other APS-C Sigma lenses for a while and they’ve been nothing short of amazing in terms of longevity.

Aesthetically, the lens is boring but not necessarily in a bad way. The lens barrel is very simple, featuring a large zoom ring and a smaller focus ring. There’s a focal length scale, the typical Sigma “C” logo, and the name of the lens engraved just above the focus ring.

Besides that, it’s all sleek and minimalist polycarbonate. The lens barrel, as mentioned prior, does extend a little when zooming, but it’s pretty minor and doesn’t make it feel cheap like some other zoom lenses.

The zoom ring offers perfect resistance that allows for easy turning while being “tight” enough to feel tactile. I observed no zoom creeping, which is an issue some lenses suffer from. The rings are also incredibly grippy (despite being plastic), which is really nice especially in colder weather (big gloves and numb fingers).

There are no buttons or switches, so no physical AF/MF switch, but that’s to be expected on a lens that’s this compact, so no complaints from me there. Overall, the Sigma 18-50mm F2.8 is a joy to use, feeling perfectly perfectly well balanced and comfortable on my Sony a6000.

Alrighty, let’s talk sharpness. I’m not the type that obsessively and scientifically tests every single part of the zoom range, so we’ll cut right to the chase here.

The lens offers really respectable sharpness across the entire zoom range. Even at F2.8, you’ll find consistent edge-to-edge quality. F8 is arguably peak sharpness, but the improvement is barely noticeable unless you heavily pixel peep. F16 is when diffraction kicks in and really destroys those edges, so make sure not to stop down that tight.

There’s more pixel-peeper type tests you can find elsewhere, but if you’re looking for the simplified version: yes, the Sigma 18-50mm F2.8 is very sharp. It’s not quite on the level of a Sigma prime, but for a zoom lens, especially so compact, sharpness is very impressive.

Now, we’ll look at optical flaws such as distortion, vignette and that sort of thing.

Chromatic aberrations are virtually non existent, and you’ll barely notice anything even in the most extreme of cases.

Flaring is also fairly well controlled. Shooting directly into sunlight can cause some minor ghosting and loss of contrast, but it’s really not too bad compared to a lot of lenses. Just use the included lens hood and avoid shooting into the sun and you shouldn’t have any issues whatsoever.

Vignette is a little heavy, however, especially around the wider end of the zoom range. It is largely fixable in post-processing though, requiring about 2 stops of exposure compensation to off-set, so it’s not terrible.

Distortion is really the only major optical struggle the Sigma faces. At the wider end of the zoom range, the lens suffers from heavy barrel distortion, while the tighter end sees more of a pincushion type. Either way, the lens profile in Lightroom (and JPEG processing) should be able to easily off-set this, but you may still see crooked lines if shooting something like architecture or real estate.

Is the bokeh creamy?

The bokeh is (mostly) creamy and pleasant. It is, again, not on the same level as the Sigma 56mm F1.4 for example, but the constant F2.8 aperture offers solid results.

In “busy” photographs (with cluttered backgrounds) or at the wider end of the zoom range, the bokeh can look a bit rough and chaotic. At 50mm, simple backgrounds produce clean bokeh balls.

Although a prime will always produce better backgrounds, the Sigma 18-50mm F2.8 can hold it’s own, even for portraiture type shots.

Overall, I’m very impressed with the optical performance of the Sigma 18-50mm F2.8. Sharpness is consistent, and stopping down isn’t necessary to get beautiful edge-to-edge results.

Distortion is the only optical weirdness that it suffers from, offering great aberration control, solid flare performance, and easily-fixable vignette.

I said it before but I’ll say it again: I’m blown away by how well this lens performs given its specs and compact size.

Alrighty, so everything else looks good, but how is the autofocus on the Sigma 18-50mm F2.8? Really solid, actually.

I would assume it uses the same focusing system as the Sigma trio, so AF tends to be quick and largely reliable. Performance is nearly flawless in good light, and even in dark conditions the lens didn’t seem to struggle with hunting much.

The stepping-motor is also quite quiet. When doing a quick video test, I found that the autofocus was barely perceptible on the (crappy) onboard microphone of my a6000. I’d imagine that using an actual dedicated microphone would be even better.

Overall, the autofocus was great, playing really well with Sony’s various focus assists such as EyeAF and subject tracking.

So, now that we’ve covered autofocus, let’s cover the art of manually focusing with your own hands.

The manual focus experience is pretty typical of a modern autofocus lens. The focus ring is well dampened and feels precise enough, but the awkward positioning (near the lens mount) made it hard to grip.

Pretty incomparable to a dedicated manual lens, but that’s alright. I doubt any photographer is buying this lens for manual focus anyway.

Speaking of focusing, I want to mention the INCREDIBLY short focus distance on this lens. At 18mm, the minimum focusing distance is literally just an inch (2.5cm). At this focal length, that means you have to stick the lens almost directly up to the subject, casting shadows and creating some insane field curvature.

For macro enthusiasts though, zooming in (and backing up) offers better results. Focusing distance at 50mm is roughly 12 inches (30cm). You won’t get results like a dedicated macro lens of course, but the macro performance is still quite solid for casual usage.

While this is certainly a downside, I’m not surprised. Adding stabilization would have added a bit of bulk (and cost) to this compact lens, plus newer Sony a6000 series cameras offer IBIS anyway.

Still, as someone who still uses an a6000, the lack of stabilization is still kind of a bummer.

I personally think the Sigma 18-50mm F2.8 is incredible, but I’d like to offer some alternatives before we round out the article.

The first competitor is the Sony 16-55mm F2.8. It offers better overall image quality (sharpness & optical flaws), but with a bigger build AND a substantially larger price tag.

The second competitor would be the Tamron 17-70mm F2.8. The Tamron offers a much larger focal range (and similar sharpness), but is HUGE and more expensive. It does, however, offer stabilization.

Finally, if you’re upgrading from the kit lens, this Sigma will blow it away in literally every way except for size.

Frankly, I find the Sigma 18-50mm F2.8 hard to beat. Sigma has put out nothing but quality lenses over the last few years, and this zoom is no exception.

A versatile zoom range, great image quality, and a solid yet compact build all come together to make this one of my favorite lenses I’ve ever used. Generally I’m a prime purist, but this Sigma has opened my eyes.

I’ll still use my primes for most purposes, but this is the kind of lens that made me switch away from bulky DSLRs in the first place. I’d been hunting for a versatile yet still small and sharp lens for travel, and I think I finally found it.

And to top it all off, it’s cheaper than a lot of competitors. If you’re interested in picking up this compact beast for yourself, I’ll include purchase links below. Thanks for reading!

Some articles on this website contain affiliate links. That means whenever you buy a product through one of these links, I get a (very) small commission at no extra cost to you. Thank you! <3