Ever wanted to use your camera to warp reality into an incredibly distorted circular shape? All you need is an ultra-wide fisheye lens!

Jokes aside, today we’ll be looking at the fully manual Rokinon 8mm F2.8 II fisheye lens, featuring a roughly 180 degree field of view. Rokinon has also rebranded this under the “Samyang 8mm F2.8 II“, but both are identical. This review will be covering the Sony e-mount version, but this lens is also available for Canon M and Fuji X mounts.

So, is this wacky little fisheye even a good lens? Can I bend reality into a circular shape through my photographs? Let’s jump in and find out. 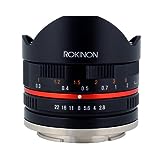 So, first up let’s look at the size and weight of the Rokinon 8mm F2.8 II. As with many other fisheye lenses, this thing is tiny. It measures only 2.5 inches (6.3cm) long, even with its cute little lens hood.

As for weight, this tiny fisheye weighs a rather respectable 10oz (283g). While this may not seem like a lot, its actually pretty hefty given how tiny this lens is otherwise. This is largely thanks to the build quality, more on that in a second.

The small size yet decent heft makes it a natural fit for my already compact Sony a6000, balancing quite well on the small camera.

As I just mentioned, this little lens feels surprisingly strong in the hand. As with a lot of Rokinon’s lenses, this one features a full metal barrel and a small but well built (plastic) lens hood. The lens is not weather sealed, but it feels robust enough to handle some light to moderate conditions.

It should be noted that Rokinon (along with many other Chinese manufacturers) generally have poor quality control. While my copy was just fine, there’s reports of other customers who have had weird issues like inconsistent sharpness, wobbly barrels, etc.

For that reason, I’m hesitant to say that this lens is built to last. While it may feel hefty and strong, Rokinon doesn’t have a flawless history in terms of quality control. It’s also important to note that, due to the curved front element, the lens is VERY prone to bumps and scratches, even with the lens hood.

As for aesthetics, the Rokinon 8mm F2.8 II is a pretty decent looking lens. I realize beauty is a subjective thing, but I really like the red ring in between the focus/aperture ring. It also comes in silver!

The small petal-shaped lens hood is hilariously small, but it does its job to protect the curved front element against bumps and (to a lesser degree) flare.

Ergonomically, I really have no complaints. The focus ring is awkwardly tiny, but considering this lens is so wide angle, you’ll rarely have to refocus anyway. Overall, it was comfortable and enjoyable to use during a long shooting session.

Next up, let’s talk sharpness. I don’t get very scientific in my reviews, so I’ll just put it like this: the Rokinon 8mm F2.8 II is very sharp due to literally everything being in focus.

As for optical “flaws”, you’ll really only experience heavy flaring. When shooting at the sun, you’ll experience J.J Abrams levels of lens flare.

At wide apertures, the sun turns into more of a “blob”, but tighter F-stops actually render a pretty nice sunstar shape.

Virtually no chromatic aberrations or vignette issues. Distortion is insane, obviously, given that this is a fisheye lens. I did find, however, that using distortion correction in post-processing actually created some decent wide angle shots.

If you’re buying this lens to get the full distorted “fisheye vibe”, you will not be disappointed.

Overall, pretty solid optical performance. Flare is noticeable, but otherwise the lens doesn’t suffer from CA or vignetting. Distortion is crazy of course because that’s why you buy a fisheye.

Sharpness overall is quite good, given that literally everything is always in focus anyway.

So, let’s talk about the manual focus experience for the rare occasion where you actually need to refocus this lens.

The focus ring is small, but has plenty of little grips to grab on to. In the vast majority of cases, you’re good to set the lens at infinity and forget about it. However, you’ll need to refocus for anything under 3.5 feet (106cm).

When you do need to use the focusing ring, it’s actually pleasant. Fairly well dampened with a good focus throw, so no complaints from me there. The aperture ring is clicky (yay!) and feels nice to operate.

Lastly, many photographers would probably consider this lens for astrophotography. Ian over at lonelyspeck.com has a much better astrophotography review for the Canon variant, but I’ll try to summarize my findings here.

Coma performance is great with only a few hints of stretched stars at the extreme edge of the frame, way better than most lenses I’ve used when (attempting) to photograph the stars.

I’m an astrophotography noob, but Ian notes in his article that when “defishing” (distortion correcting) images that he is able to get up to 60 second exposures without star trails. That’s insane.

Speaking of distortion correction, this lens actually becomes pretty solid as a “serious” piece of glass when you take away the heavy distortion in post processing.

8mm is an incredibly wide focal length, and correcting the fisheye in post opens up a lot of really interesting possibilities for ultra-ultra-ultra-wide shots. Just something to consider.

Usually I list alternatives at the bottom of each article, but I really haven’t reviewed any lenses that are direct competitors to this one. What I have tried though, are a few ultra-wide (not fisheye) lenses, so I’ll list those below.

The Rokinon 12mm F2.0 is an epic wide angle and, frankly, one of my favorite manual focus lenses. It’s a little pricey, but the optical performance is absolutely phenomenal and it’s a favorite among astrophotographers.

My second suggestion, if you’re considering photographing architecture or any other straight lines, would be the Laowa 12mm F2.8. It features (nearly) zero distortion, great sharpness, and a very premium build.

Otherwise, if you’re dead set on the wacky fisheye vibe, the Rokinon 8mm F2.8 II really is the way to go.

This lens is sharp, tiny, and pretty fairly priced. If you’re interested in picking it up yourself, I’ll drop purchase links below. Thanks for reading, folks. 🙂