Today, I want to look at yet another budget Chinese lens, the Meike 28mm F2.8.

Thanks to the ultra low price and the fact that it was the size of a thumbtack, I went in without expecting too much.

When throwing it onto my Sony a6000, however, it turned out to not be too bad.

Let’s jump into the review! 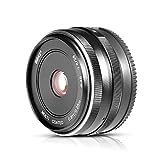 Like the header says, the Meike 28mm F2.8 is the absolute tiniest lens I have ever had the pleasure of using. They market it as a pancake lens, and I found that to be absolutely true at only 1 inch (2.4cm).

Seriously, it’s THAT small. Absolutely unbelievable! And, as icing on the cake, it only weighs a measly 3.6oz (102g). No joke, this thing literally makes the a6000 a pocket camera.

Despite the small size and low weight, the Meike 28mm F2.8 is almost entirely made of metal, including the lens cap.

It’s small, and balances really well on my Sony a6000. I especially liked how the distance numbers and the text popped against the sleek black metal.

It’s not all sunshine and rainbows, however. Anyone who has used these cheap off-brand lenses will tell you that build quality is always incredibly hit or miss. I seem to get lucky with most of my lens purchases, but other users have reported shaky barrels and poorly fitted caps with this one.

So, given how tiny the lens is, the sharpness is what surprised me the most. The Meike 28mm F2.8 was a little soft wide open, but by F4 the entire frame is consistently sharp, and it seemed to peak around F5.6.

This impressed me a lot, as most of these super cheap budget lenses suffer from awful corner sharpness. That being said, don’t push past F16 because diffraction really hits hard.

I still want to make it clear that this thing won’t outperform a Sony or Sigma. It will, however, perform respectably well for it’s pricetag.

Bokeh wasn’t anything to write home about. As you’d expect from a wider lens without a bright aperture, bokeh just looks decidedly average. Nothing super impressive, but bokeh is probably not why you’re buying this lens.

No lens is perfect and this one is no exception. Flaring is pretty rough, so shooting into direct sun is nearly impossible. I’ve found this to be a trend on almost all ultra-budget lenses. My Neewer 35mm F1.7 makes me feel like JJ Abrams whenever I’m shooting into lights.

Vignetting is strong when wide open, but is largely gone by the time you stop down to F5.6. Chromatic aberrations are well controlled. Distortion is a bit funky but it can be mostly fixed in post-processing. Has some weird effects on stuff like architecture if it’s not corrected.

The focusing ring on the Meike 28mm F2.8 felt smooth and concise, which is no surprise as I’ve found that to be the same on most other cheap Chinese lenses (such as the Neewer 35mm F1.7).

If you’re reading this and haven’t dabbled in manual focus in the past, I’d encourage you to read my complete guide on manual focus for Sony cameras. It’s a great read for both new photographers & veterans. As an additional note in that regard, this lens requires the “release w/o lens” setting to be turned on, which is also covered in that guide.

The physical aperture ring turned smoothly, but I found it to be potentially a bit inaccurate. It’s a bit hard to explain, but upon turning the ring, you had to move it a bit before you start to see the aperture blades moving inside the lens. It didn’t really cause me any issues, but just a weird observation.

I don’t think I really have too much to say about this lens. Flaring and vignetting are pretty bad, but stopping down remedies the vignette and also delivers respectable (for the price) sharpness across the entire frame.

Though what really got me is the size. I absolutely love having a compact setup, so this little lens is like a dream come true in that regard. Only an inch (2.4cm) long is awesome, definitely deserving of the “pancake” title. This is literally the kind of lens I had in mind when I first considered switching to mirrorless many years ago.

So if you’re looking for an absolutely tiny lens that also has great sharpness, I’d suggest checking this one out. You can’t really go wrong for the price in my opinion. I’ve included purchase links below if you’re interested in checking it out for yourself. Thanks for reading! 🙂

Some of the links in this article might be affiliate links. This means that if you buy anything through these links, I get a (very) small commission at no extra cost to you. Thank you for the support! <3