Tiny and dirt cheap, that’s the usual qualities that almost all Meike lenses share. Some are good, some are crap.

This particular $75 lens, however, falls squarely into the “good” category.

When coupled with my Sony a6000, I have to admit, this little manual focus lens performed a lot better than I expected.

Let’s hop into the review! 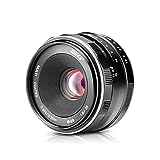 As a lover of compact gear, the Meike 25mm F1.8 was a delight. Sitting at only 1.46 inches (3.7cm) long, it balanced very well on my Sony a6000 both aesthetically and ergonomically.

In terms of weight, it’s actually a bit heftier than you’d expect at 7.4oz (210g). This is owed to its shockingly nice build quality.

Is the lens built well?

Speaking of build quality, the Meike 25mm F1.8 is completely made of metal like most of the company’s other offerings. For the price, it’s really nice to have such a good looking (and good quality) lens.

There’s even a lovely silver ring that frames the front of the lens, contrasting with the sleek black metal.

In addition, the lens rocks a small distance meter, which I found looked really nice, and not to mention functional. Even the lens cap is entirely made of metal, though it’s a slip on/off kind, so it’s prone to getting lost easily.

It should be noted that lots of Meike lenses (any cheap Chinese lenses really) are known for having inconsistent quality control, so just because I got a good copy doesn’t mean yours will be perfect! Luckily, from what I’m aware, the company is pretty generous and easy with returns.

For the price, sharpness certainly didn’t disappoint. The Meike 25mm F1.8 isn’t perfect, but for the price point it’s hard to complain.

To begin, both the center and the corners are really soft and lack contrast wide open. However, stopped down to even just F2.8 causes the centers to start looking really nice, and it seems to peak around F5.6-F8.

Corner sharpness is awful initially, but starts to look decent at F4, also seeming to peak around F8.

Bokeh isn’t super great either, but this is a bit of a wider lens, so that’s to be expected. Still, getting up close and shooting wide open does form some pretty decent looking bokeh balls.

A lot of Meike lenses seem to have flaring issues, and this one is no exception. When shooting into bright sun, the lens creates JJ Abrams level of lens flare, so I’d suggest trying to form a “makeshift lens hood” with your hands.

Besides that, chromatic abberation is handled very well and vignette is very minor.

Distortion, on the other hand, is pretty heavy. While mostly correctable in post processing, this might not be the best lens to use if you’re trying to get photos of straight lines (such as architecture).

Next up, let’s focus on focusing. The lens is entirely manual, as stated prior, but if you’ve only ever used autofocus, don’t be intimidated!

I personally found the Meike 25mm F1.8 to be a fairly easy lens to use. The focusing ring itself has a sort of ridged-type design that acts as a grip allowing for smooth and mostly precise focus.

If you’re interested in learning more about manual focus, I’d suggest reading our complete guide on manual focus for Sony cameras. It’ll cover anything and everything you’ll ever need to know about the world of manual focus.

In addition to being manual focus, the Meike 25mm F1.8 also has a physical aperture ring. It works well, and was tight enough to where I didn’t slide it out of place too often on accident.

Anyways, before we finish out this article, I would just like to introduce one alternative: the Meike 28mm F2.8. It would be a little bit tighter, and without as bright of an aperture, but it’s also a bit cheaper, smaller, and overall slightly sharper. Just an alternative to consider.

Either way though, I was impressed with the Meike 25mm F1.8. Despite the insane flaring (JJ Abrams would be proud), the overall image quality did not disappoint. Sharpness peaked between F5.6 and F8 and, though incomparable to a Sigma or Sony lens, looked quite respectable overall.

Between the solid sharpness, tiny size, and the dirt cheap $75 price tag, it’s hard to go wrong with this lens. If you’d like to give it a try for yourself, I’ve included an Amazon (affiliate) link below. Thanks for reading, folks! 🙂

Some of the links on this website are affiliate links. This means that whenever you purchase an item through these links, I get a (very small) commission. Thanks you! <3