Laowa is a lesser known lens manufacturer that has put out a lot of incredible glass over the years, and the Laowa 65mm F2.8 is no exception.

Although it may not sound like anything special, it provides a very impressive 2:1 magnification ratio for Sony APS-C (a6000 series) macro shooters.

So how does this off-brand, fully manual focus lens perform? Let’s find out. 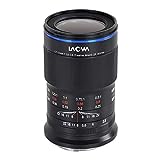 While not terribly huge, this is rather large for an APS-C lens. It certainly feels a bit large and heavy on a Sony a6000.

With that being said, the heavy weight comes from the excellent all-metal build of this lens. Seriously, everything is metal, including the large lens hood.

In fact, I’d argue it feels almost like a high quality classic/vintage lens, which is something we’ve seen with some of Laowa’s other offerings.

What the lens does lack, however, is weather sealing. This isn’t too surprising considering it’s a fairly budget lens, but it would have been nice to have. It doesn’t concern me that much, though, as the simple and non-electronic design means the lens isn’t as susceptible to damage from dust or moisture.

Overall, despite the lack of weather sealing, this lens is built like a tank and certainly feels like its designed to last forever.

In addition to the premium build quality, the Laowa 65mm F2.8 is also just downright beautiful. The text engravings are a mixture of red and white which contrast quite nicely against the sleek black finish of the lens barrel.

To really top off the aesthetics, there’s a nice blue ring near the end of the barrel right before the hood. It’s little touches like this that can really make a lens feel and look much more expensive than it is. As a bonus, the front element doesn’t have any sort of text or branding on it, making for a nice minimalistic finish.

As for ergonomics, this lens is a joy to use. The aperture ring has ribbed grips and is clicked to allow for easy and accurate adjustments.

Some photographers prefer clickless aperture rings, but I’m more partial to clicked rings as they can be operated without having to physically look to make sure you selected the right F-stop.

As for comfort, I did find the lens to be a little big front-heavy on a Sony a6000, but overall it wasn’t too bad. Most photographers should be able to shoot with it comfortably for a fairly extended period of time before suffering hand fatigue.

Next up, we’re going to talk about sharpness. As a macro lens, the tiny little details are all the more noticeable, which is when having great sharpness really comes into play.

Luckily, the Laowa 65mm F2.8 is stupidly sharp, even wide open. Centers are excellent and there’s very, very little softness around the corners.

Stopping down doesn’t make a huge difference as everything is already great, but it does boost contrast and sharpens up the extreme far corners of the frame.

Honestly, this is probably one of the sharpest lenses for APS-C, it looks just spectacular no matter what subject you photograph (macro or otherwise).

While most lenses tend to suffer from some sort of optical aberration or flaw, the Laowa 65mm F2.8 is largely free of any major issues.

Distortion was very negligible and while vignetting was prevalent, it was fairly minor and should be easily fixed in post-processing. Flaring is minor but shooting directly into sunlight should still be avoided due to minor ghosting.

Chromatic aberration, however, is a point where this lens really shines. Due to the apochromatic design (a type of lens design that’s way to complicated to explain here), the Laowa suffers from virtually no chromatic aberrations, even in situations where other lenses would immensely struggle.

Overall, quite impressed with the optical performance of this lens, bravo.

As stated in the introduction, the Laowa 65mm F2.8 offers 2:1 magnification which is quite impressive and makes this lens possibly the best macro lens for Sony APS-C cameras.

In addition to the stellar magnification ratio, the lens offers a very nice minimum focusing distance of 6.7 inches (17cm), allowing you to get quite up close and personal with your subject.

Bokeh, given that this is a macro lens, looks pretty good. It’s not exceptional, but it’s smooth and non-distracting enough to provide nice subject isolation.

Speaking of which, I wouldn’t hesitate to use this lens for other purposes such as portraits.

The focus throw (more on that later) is extremely large, so it wouldn’t be great for anything fast paced, but for a casual portrait session the Laowa could be a great option.

The Laowa 65mm F2.8 lacks autofocus is is entirely manual, and I found it to be a really enjoyable experience.

The focusing ring is dampened just right to where it feels easy to operate but stiff enough to where it shouldn’t be knocked off balance.

The throw (how far the ring turns from end to end) is roughly 240 degrees, allowing for extremely precise (if a bit slow) focus.

As an avid user of manual lenses, I really enjoyed the focusing experience on this one.

That being said, if you’re new to manual focus, I’d encourage you to give our complete guide to manual focus a read. It was written for the Sony a6000 in mind, but is applicable to any Sony camera.

There aren’t many alternatives for macro lenses for Sony a6000 series cameras, but I’ll list a few of my other suggestions.

Second, the Sony E 30mm F3.5. It’s arguably the most popular macro lens for APS-C cameras, but it’s lacking in a lot of ways. It offers autofocus, but this Laowa lens beats it in sharpness, build quality, and magnification.

Finally, the 7artisans 60mm F2.8 is a very budget option that only offers 1:1 magnification, but makes up for the flaw due to its low price tag.

Overall, the Laowa 65mm F2.8 is a mighty macro lens that provides excellent 2:1 magnification along with great sharpness and build quality.

Manual focusing is a joy to use, the lens is built like a tank, and, to top it all off, it’s reasonably priced, sitting at around $400 from most retailers.

If you’re interested in picking up this awesome macro lens yourself, I’ll include purchase links below. Thank you for reading. 🙂

Some links on my website are affiliate links, which means if you purchase anything through these links I get a (very) small commission at no extra cost to you. Thank you!