Today we’re going to look at something a little bit different. We’ve been reviewing a lot of low cost Chinese lenses recently, so now it’s time to look at one that is a bit more expensive and premium.

The Kamlan 50mm F1.1, also known as the bokeh beast, is a manual focus APS-C lens (made for the Sony a6000 series) that is famous for, you guessed it, excellent bokeh.

Kamlan’s previous generation of this lens was plagued with softness issues, but still managed to gain a bit of a cult following. For the Mark II (this version), they’ve really stepped up their game. So, let’s dive right in! 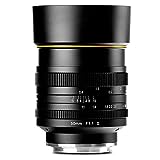 This is rather large and hefty for an APS-C lens, so it felt a bit front heavy on my Sony a6000.

This lens is heavy for a reason, however, and that’s due to its incredible build quality.

There’s a LOT of glass, and the entire thing is made of heavy duty metal. Everything feels quite premium, even down to the front and rear metal lens caps.

One thing to note is that the Kamlan 50mm F1.1 has a bit of a strange lens hood design. It’s actually a screw-on lens hood, and it is attached to the outside of the lens, allowing the inner 62mm filter thread on the lens to still be used.

That being said, with the hood on, it’s nearly impossible to use something like a circular polarizer or variable ND filter.

However, Kamlan thought of that too. The front of the lens hood itself actually has a 72mm filter thread for attaching stuff on the outside.

Overall, this thing feels built to last. It’s substantially higher quality than even most of Sony’s APS-C offerings and felt incredibly heavy duty on my Sony a6000.

It may sound silly to review the aesthetic properties of a lens, but I think the Kamlan 50mm F1.1 deserves a section dedicated to its appearance.

I personally think this lens is gorgeous. The white text contrasts beautifully against the sleek black metal of the lens barrel, and the golden ring near the front element ties it all together.

Both the focus and aperture rings are hefty and ribbed, really sealing in the premium yet vintage feel.

The sharpness on the Kamlan 50mm F1.1 blew me away. While maybe not quite as sharp as the Sigma trio, it came darn close.

Sharpness wide open was pretty good, at least in the center, but it fell off a bit around the corners.

However, this lens really shines when stopped down. At F2, the center is ridiculously sharp, but the corners still show a twinge of softness.

By the time you hit F4, though, the entire frame is tack sharp consistently. For portraiture, I’d probably shoot around F2.5 or so for a good mix of sharpness and bokeh.

Speaking of bokeh, there’s a reason the Kamlan 50mm F1.1 is known as “the bokeh beast”.

I’ll cut right to the chase for this section: the Kamlan 50mm F1.1 creates possibly the most beautiful bokeh you’ll ever see on APS-C.

With 11 rounded aperture blades, out of focus backgrounds just render with the most perfect bubbly-bokeh you’ll ever see. Subject isolation is incredible.

In fact, I found myself avoiding shooting completely wide open because it was almost too strong!

I’ve tried out a lot of wide aperture lenses over my time of writing on this blog, but this one just blew everything else away. The only lens that even came close, again, was the Sigma 56mm F1.4.

As for any optical flaws, the biggest issue I ran into was chromatic aberrations. When shooting, I’d say, wider than F4, there’s a lot of fringing on brighter objects (shiny cars, for example).

Flaring is also a bit strong in bright sun, but not as bad as a lot of cheaper lenses.

Overall, I wouldn’t consider either much of a problem in portraiture, but it’s something to consider.

On the other hand, distortion and vignetting were practically non-existent. In fact, there’s some more complicated technical analysis that goes into the incredible vignette performance.

Dustin Abbot (who knows way more about that subject than I do) covered it over in his blog. Check out his post if you’d like a more scientific view as to why vignetting is so well controlled (even on full frame).

As stated earlier in this article, the Kamlan 50mm F1.1 is fully manual focus… and it’s perfect. The focusing ring has just enough weight and tension to feel concise, but is just smooth enough to be able to turn easily.

I know I’ve been praising this lens a lot so far, but this is one of my favorite focusing rings I’ve ever used.

As an additional note in that regard, make sure the “release w/o lens” setting is enabled in your camera otherwise it won’t “recognize” this lens.

Moving onto the aperture ring. It is de-clicked, meaning it turns smoothly and doesn’t have audible/tactile clicks whenever changing apertures.

I’m a bit more partial to clicked aperture rings, but this one I actually liked a lot. It’s just tight enough to where there’s not much risk of accidentally bumping it out of place.

I have nothing but great things to say about the Kamlan 50mm F1.1, and I’m really interested to see what else Kamlan can come up with in the future.

Normally in my reviews, I like to offer up alternative options, but really the competition is rather lacking in comparison.

There’s other third party lenses that are way cheaper, but they make sacrifices in image quality. Then there’s Sony’s official 50mm, which, while also a great lens, costs a lot more and the only advantage it really offers is autofocus (and you lose the amazing bokeh and build quality).

I will admit, however, the Sigma 56mm F1.4 (one of my favorite lenses) is pretty much up to par in terms of sharpness and even the bokeh comes close.

All that being said, the Kamlan is definitely a pretty chunky (heavy) lens, but the incredible sharpness, beautiful build quality, smooth focus, and magical bokeh combine to make it one of the favorite portrait lenses I’ve ever used, especially for only $250.

I love weird and unique lenses and, overall, I am extremely happy with it and I wish I’d have discovered it sooner.

It’s a great buy, especially for the price, and the perfect lens to pick up if you’re looking for something that’s just a little bit weird.

I’ve included purchase links below if you’d like to check it out. Thanks for reading, hopefully you’ll love it as much as I do!

Some of the links on my website are affiliate links, which means I get a (very) small commission on any purchase at no additional cost to you. Thank you! <3