Although the Sony a7iii is a battery powerhouse (rated for 610 shots), it’ll still die eventually.

Everyone knows you can just swap out a battery, but in this article, I’ll go over a few other methods of powering up your a7iii.

The first, and arguably most common method, is to use a battery charger and keep a spare battery or two on you at all times.

Over the years, I’ve tested a variety of off-brands and compared them to the Sony OEM batteries. While the OEM batteries last a bit longer, the off-brand batteries can still do just fine if you’re on a budget.

Honestly, I’d make more money by referring you to Sony, but I’d personally suggest just picking up this charger/battery combo from Neewer. You get two batteries and a charger for the same price as a single Sony battery. You’ll save a lot. 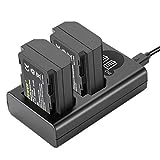 Next up, we have the most simple method: charging with a USB cable. The camera, unlike older Sony models, stays fully operational while plugged in.

There’s nothing complicated here. You literally take a USB-C cable, plug it into an outlet, and then plug the other end into your camera.

This method can work great, except there may be situations where you’re out in the wilderness, away from home, etc. where you can’t just plug your camera in anywhere. It’s also quite slow.

However, that brings us to our next method: using a power bank to charge via USB-C anywhere.

Although I wouldn’t suggest trying to hold your camera and a massive power bank at the same time, it can be a great method to use if you’re taking breaks between shots.

Toss the camera in your bag, connect it to the power bank, and you’ve got a steady stream of battery life all day long. There’s a million different options for power banks, but I’ve always had really good luck with Anker products.

Finally: using a battery grip. I personally have mixed opinions on battery grips, as they’re massive and heavy, which sort of defeats the point of using a compact mirrorless system.

Still, if you need a LOT of power and don’t want to mess with spare batteries or charging cables, a battery grip is absolutely the way to go.

Sony actually makes an OEM battery grip for the a7iii, but it’s quite expensive. If you’re looking for a cheaper option that still does the job, consider picking up Neewer’s a7iii battery grip. 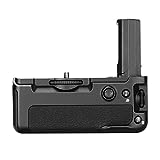 So, confused on what method to use? Although you can literally charge the Sony a7iii with a phone charger, I’d suggest picking up some spare batteries.

Having to plug in your camera when out and about can be annoying. Lugging around a battery grip that’s double the size of the camera is also quite annoying.

So, for that reason, I really do believe that tossing a spare battery or two in your bag is the most low-effort, flexible method of keeping your camera juiced up.

For convenience, here’s (Amazon) links for each method I mentioned in this article.