These days, there’s an abundance of cheap third party lenses from Chinese manufacturers. Some are absolutely awful while some are actually pretty good.

Today, we’ll be looking at the 7artisans 60mm F2.8 (Mk II), a manual focus macro lens that falls squarely into the “good” category.

It’s worth noting that this is actually the 2nd edition of this lens. The first was rather poorly received, but this sequel turned out to be pretty solid.

So how does this cheap third party lens stack up against more expensive competitors? Is it worth the purchase? 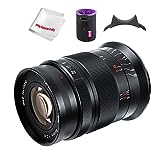 While this may seem a bit on the larger side, macro lenses tend to be heavier and longer than non-macro variants in similar focal ranges.

Regardless, I found that, despite the heft, it still balanced well on my a6000, even if it was a bit front-heavy.

All that weight comes from somewhere of course, and that’s the premium build. A lot of budget Chinese lenses tend to be fully metal, and this one is no exception.

The 7artisans 60mm F2.8 certainly doesn’t feel cheap, but it should be noted that this company (and some other low budget lens manufacturers) generally have inconsistent quality control. I’ve had a few cheap lenses over the years that have had wobbly barrels, scratched optics straight from the factory, etc.

For this reason, I can’t say for certain if this lens is truly built to last. It’s heavy and feels like a tank, but my experience with cheap lenses in the past makes me hesitant to give it a fully positive outlook.

Some of my budget lenses have lasted years, while some have crapped out on me within months. Only time will tell.

Next up, let’s talk about aesthetics. Beauty is subjective of course, but I think this lens is absolutely gorgeous.

The lens barrel is finished with sleek black metal which contrasts extremely well with the white and red text (sadly, the text is printed, not engraved). The scale near the base of the lens is very reminiscent of vintage glass, which I love.

As for ergonomics, I found the lens to be, despite the weight, pretty comfortable to use.

The focusing ring is positioned at the center of the lens barrel, creating a very natural gripping point (seriously, the ring material is very grippy).

My only complaint is that, as I stated prior, the lens is quite heavy. The weight makes it a bit tough to get super precise focus without a tripod (I have naturally shaky hands though).

Alright, next up we’re going to talk about sharpness. I’m not the type to do any sort of complicated scientific lens tests, so this is mostly based off what I observed by pixel-peeping.

Even wide open, the lens is pretty sharp, showing decent edge-to-edge performance with only moderate fall-off. Stopping down a bit (think F5.6) is where it seems to peak. Really impressive performance and definitely no complaints from me there.

The only thing I have to note is that, as this is a macro lens, the focus plane is extremely thin. As such, on non-static subjects (plants, insects, etc.) you’ll run the risk of getting “soft” images due to slightly missed focus. Make sure to playback all your shots to make sure the focus wasn’t off.

As for optical quirks and flaws, the 7artisans 60mm F2.8 suffers from some major vignette unless stopped down.

While this is largely fixable in post (or stopping down), it may cause digital noise in the case of low-light shooting.

Still, a bit of vignette can actually enhance a picture and bring attention to the subject, so I don’t consider this a huge concern.

The lens also flares a lot, but generally you won’t be shooting into the sun with a macro lens, so I don’t see it as an issue. Honestly, heavy flaring can even be used artistically if you’re creative enough.

What I did notice, however, is just an overall lack of contrast (minor), regardless of F-stop. While this isn’t great for capturing a crisp, sharp subject, it does help with creating creamier and smoother bokeh. I personally like the look myself.

Distortion is non-existent and I didn’t notice any sort of chromatic aberrations.

Alright, next up we’re going to touch on macro performance.

The lens offer 1:1 magnification which, while quite common for budget lenses, can’t quite stack up to the 2:1 magnification of the Laowa 65mm F2.8. Still, it’s a cheap lens, so you can’t expect absolute perfection.

Minimum focusing distance is roughly 7 inches (18cm). Pretty standard and nothing to complain about in that regard. Subject isolation and bokeh are, as you’d expect, spectacular.

Overall, the lens is optically strong. Being a low cost lens, you can’t expect everything to be flawless, but I was pretty happy with the performance. It’s razor sharp and, despite the lack of contrast, delivers nice images that pop against the (very creamy) backgrounds.

Magnification isn’t 2:1, but that’s rare to find on APS-C, especially at this price point, so it’s definitely excusable.

So now we’re going to talk about focus. As stated prior, the 7artisans 60mm F2.8 is fully manual focus. I’ve used a LOT of manual lenses over the years and this one is pretty solid, but with a few caveats.

It’s hard to explain how a lens “feels”, but I’ll try my best. The focusing ring is perfectly dampened, spinning very smoothly with just the right amount of resistance. There is some (very) small play when moving around, but I didn’t find it to cause any issues for me as I refocus before each shot anyway.

Focus throw is quite large, about 180 degrees in fact. Those 180 degrees are almost entirely the travel between minimum focusing and 3ft (91cm), however. Beyond that, focusing to infinity requires only a tiny bit more turning, making focusing on distant subjects quite a challenge.

The focusing system in this lens was clearly designed with purely macro in mind, so consider that if you’re looking at using this lens for anything besides exclusively macro.

Being a fully manual lens, the 7artisans 60mm F2.8 has no electronic connections to the camera. This means that photos will not automatically have EXIF data such as aperture, focal length, lens name, etc. embedded.

Due to this, the lens features a physical aperture ring. It’s clickless, which means it spins smoothly without any hard stops. I personally prefer clicked (hard stop) aperture rings, but this one worked just fine.

By the way, if this is your first manual lens, make sure to enable the “release shutter w/o lens” option in your camera settings. In fact, if you’re looking to learn more about manual focus lenses in general, check out my huge Sony a6000 manual focus guide. It’ll tell you everything you’d ever need to know (and more!) about manual focus.

Before I round out my reviews, I always like to offer a few alternatives to consider.

First up, we have the spectacular Laowa 65mm F2.8 (my review here).

It offers 2:1 magnification, excellent optical quality, and an incredibly premium build. It is, however, A LOT more expensive.

It’s arguably the most popular macro lens for Sony APS-C cameras, and for good reason. Price is reasonable, sharpness is decent, and it has autofocus. It’s kinda just… old and boring though.

If you’re a hardcore macro photographer, consider spending twice the money on the previously mentioned Laowa.

Still, if you’re looking to get into macro on the cheap, I really think the 7artisans 60mm F2.8 is the way to go.

It offers 1:1 magnification, solid optical performance, a premium build and, of course, a budget-friendly price tag.

I’ll leave a purchase link below so you can pick it up yourself. Thanks for reading! 🙂

Some of the links on this site may be affiliate links. This means I get a (very) small commission if you purchase something through one of my links. This does not affect your price. Thank you!