I’ve reviewed a lot of cheap Chinese lenses on this site. Some of this dirt cheap glass is worth your money, and others are not.

The 7artisans 25mm F1.8 falls squarely into the middle of those two categories. (by the way, read to the end where I discuss other low-budget alternatives)

Designed for APS-C, this is a fully manual focus lens that costs a freakishly low amount of money, and today we’ll be looking at it on my Sony a6000.

Let’s jump into the review! 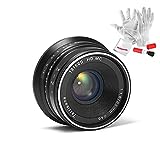 If you’ve checked out any of my other lens reviews on this site, you’ll know I ADORE small setups. The 7artisans 25mm F1.8 certainly hits the mark in that regard.

Weighing only 5oz (143g) and measuring ONLY 1.25in (3.2cm) in length, this lens is reminiscent of the film camera primes of the past.

Any negative aspects aside, this lens is just so fun to use because it’s so damn tiny.

So is the lens well built? Kind of.

Visually, it’s beautiful. The lettering and numbers pop and contrast well against the barrel. It comes in either black or silver, and the latter option adds a nice golden ring around the front, making for a very premium look despite the low pricetag.

Speaking of premium, I must admit that the lens is built fairly well. While nowhere near the level of a high-end OEM lens, the 7artisans 25mm F1.8 feels decently solid and sturdy in the hand.

With that being said, many of the cheap Chinese lenses are rather infamous for having inconsistent quality control. I’ve had issues with the focus ring (more on that later), and there’s plenty of other people who have had problems with other lenses from this brand.

Next up, let’s talk about image quality. I’m not going to sugarcoat it, because the 7artisans 25mm F1.8 struggles a bit.

While wide open, centers stay sharp, but quality degrades heavily around the corners. While this may be alright for portraits and center-framed subjects, it’s definitely very noticeable in landscape type shots.

Luckily, stopping down does fix the softness for the most part. At F8, which seems to be peak sharpness, both the center and the corners look way better with much less quality loss.

Lackluster performance aside, this lens has a very nice, contrast heavy look and renders color in a very moderate, neutral manner (easy to edit).

There are some other optical anomalies though.

The 7artisans 25mm F1.8 suffers from some heavy vignetting that reduces in intensity as you stop down. This is mostly fixable but can cause noise issues if the edges need to be fixed (brightened) in post.

As with many ultra-budget lenses, the 7artisans 25mm F1.8 struggles from some pretty intense flaring.

Avoid shooting into sunlight at all costs.

Otherwise, chromatic aberrations and distortion are both controlled very well.

Optical performance is about on-par with what I’d expect from a lens at this price-point.

The lens is nearly unusable wide open, but stopping down a bit leads to results that are what I would consider acceptable.

My fellow bokeh fans out there will be happy to know that, despite this being a wider lens, bokeh is actually gorgeous. Focusing distance is about 6 inches (15cm) which allows you to capture some seriously creamy backgrounds.

Next up, we have to talk about focusing. The 7artisans 25mm F1.8 is a completely manual lens. If you’re new to manual focusing, I’d highly recommend you read our in-depth guide on manual focusing with Sony cameras.

It’s a complete guide that runs through camera setup, the correct settings, and even includes a list of my top manual focus lenses.

That being said, while I usually love using manual focus lenses, this one was a bit iffy.

The focus throw (how much the focusing ring can spin) is extremely short, meaning it’s tougher to lock down precise focus.

In addition, I noticed the focus ring would shift very, very slightly by itself.

I’m unsure if I just got a bad copy or if they’re all like this.

Finally, there is also a physical aperture ring on the camera.

It is clickless, meaning it doesn’t have tactile clicks for each F-stop. I personally prefer a clicky aperture ring, but many photographers prefer the smooth spinning kind. It’s all personal preference.

Is it worth it?

So, as someone who has used a lot of manual focus lenses, what are my opinions on the 7artisans 25mm F1.8? Mixed, to put it simply.

First, I’d like to start with the negatives. Personally, I think the focusing ring on this lens feels bad and is poorly designed.

The throw is extremely short, and it shifts slightly by itself sometimes, risking putting a perfectly composed shot slightly out of focus.

This is a real problem when shooting quick action like street photography.

With all that being said, it’s hard to disagree that when stopped down, the images that this lens produces are pretty decent. The bokeh is creamy, the sharpness is good, at least while stopped down.

The build quality feels premium, and it has a nice old film lens aesthetic to it which I really, really like. And, to top it all off, the lens is absolutely tiny and will take up almost no space in your bag. As a fan of small setups, I really do love the diminutive size of it.

With all that being said, buy something else.

The 7artisans is certainly a fun lens for just experimenting, but I just can’t recommend it for anything serious. Image quality is decent but the lens falls short in terms of focus.

Instead, I encourage you to consider one of two other alternatives.

My first suggestion would be the spectacular Sigma 30mm F1.4.

You get autofocus, literal best in class sharpness, and it’s really not all that more expensive.

If you’re willing to wait and save up a bit more money, get the Sigma. You won’t regret it, trust me, I’ve owned it for four years.

With that being said, if you’re on an extreme budget, don’t lose hope. During a particularly financially stressful period of my life, I picked up the cheap Neewer 35mm F1.7 and it’s been a fantastic lens over the years.

Just like the 7artisans lens, the Neewer lens is small, manual, and dirt cheap. However, the Neewer isn’t plagued by incessant quality issues and poor image quality.

If you’re absolutely in the market for a budget lens, consider the Neewer. I’ll drop a purchase link below, thanks for reading! 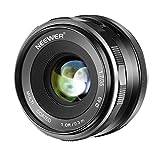 Some of the links on our website are affiliate links. That means I get a (very) small commission if you buy something through one of the links. Thank you for supporting a newbie blogger! <3